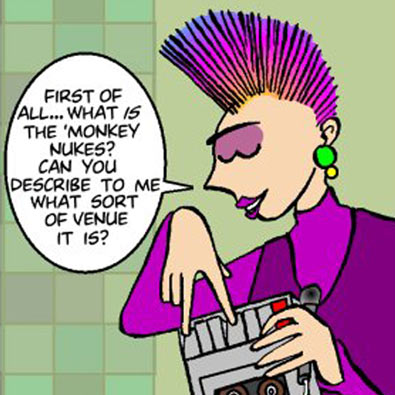 Monkey Nukes is a very enjoyable story comic. Once you start it you'll soon be engrossed in the lives and the struggles of the characters as they go about their days, bursting with potential and secrets in 1980s west London… I could go on but Simonmackie explains it far, far better himself:

“‘Monkey Nukes’ set in West London 1984 tells the story of the birth of Scottish-themed vegetarian hang-out the Monkey Nukes and the bedsitter society that surrounds it. A directionless young language teacher’s loose-end life is further unsettled when the cause of a bitterly remembered heartbreak returns only to fall into his best friend’s arms. Adam desperately needs to get her back. Or does he? Maybe some other destiny awaits him as he stumbles through the following confusion of modelling kits, murder and cappuccinos, narcotics and Walkmans, nuclear war and Betamax, love and friendship, beer and cigarettes and more beer … The story, script and artwork are all collaborations between graphic artists Simon Mackie and Ben Rowdon who have collaborated on a number of web-comics, comic strips, CD covers and illustrations since first meeting in 1984.”

The art style is in a stylised comic strip form, pen and ink with digital colour. Monkey Nukes is a marvellous snapshot of the 1980s with a solid gold ring of authenticity. Great art and an excellent writing style!

I was happy to discover it! :)