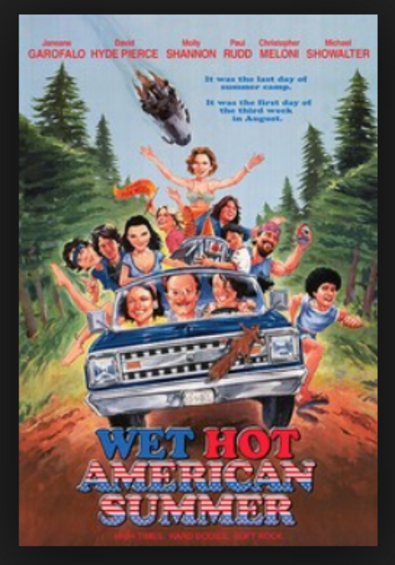 I'm not generally a fan of ‘spoofs’ or parodies. There are a few greats of course, like Young Frankenstein, but even the well-regarded ones like the Naked Gun series back in the day aren't ones I was ever crazy about. There are some funny jokes and good performances, but to sit through an entire one of those movies felt like a chore the last few times I've been around when someone's watching them.

And don't get me started on those ‘Scary Movie’, ‘Meet the Spartans’, etc parody flicks. Sweet mercy. Painful.

But I am a huge fan of, I guess you'd call it “meta” stuff…when it's done well. Like anything, it can be done badly or well.

I've been wondering if it's because I CARE about the characters, even when the piece is clearly mocking the conventions and structure of fiction. It's struck me twice, recently:

In the two series of “Wet Hot American Summer”, (which none of my friends enjoy at all, sadly) I loved the very odd sensibility and sense of humor, and the ‘turning upside down’ of structure and playing with the fact that it's a series, and a screenplay. It's done in a clever way, and a quirky way, which I enjoyed a lot. There isn't a much more meta-series around that I know of.

Yet at the end of the last series, with the last character resolution or two (including the very last shot of the series - no spoilers; it would be meaningless to know anyway, unless you see the two series and maybe the movie - I actually cheered. It made me so happy, despite the way the series regularly reminded the viewer that this was a “fake series”. I still had that attachment to the characters and their plight.

Don't get me wrong; SNL or Monty Python or Late-Night skits don't get to me. There is meta stuff that's just meta. I like it but it doesn't usually touch the emotional part of me. But some other stuff does.

Then again, teen girl squad does not affect me emotionally, other than making me laugh.

Hmm. This newspost is a bit scattered. Do you like “meta”? What are some of the shows/pieces you like? Can you explain Meta better than I have, here?

I don't think I've ever really got the hang of doing anything meta without its quickly turning into a parody of something - it doesn't matter: I love a good parody in the morning (and at any other time)! Ok, so I sometimes use author insertions and (much rarer) breakings of the fourth-wall. They're different because they have to count as bits of random silliness. I like that, too.

My own stuff started out very meta, but I had to find the right mix of ridiculous situations and winking at the audience. Slowly I learned to do characters who accepted the reality of where they were but realized just how ridiculous it was as opposed to consciously acknowledging the audience. Finally I used commentary bits by the cast or even having the cast step out of character not so much as meta as "behind the scenes " cast and crew commentary as opposed to parody. Compare Attack of... to Battle of... the Robofemoids. And Tales of SIG. Finally hit the right mix. Silly characters and ridiculous situations. I've lived a life full of both.

There's a reason why Monty Python spawned their own adjective "pythonesque" where goes beyond parody or meta into some surreal world with pounding coconuts replace horses and a newscaster behind a desk sits in an open field to segue skits. I play with it in everything I do (except that fantasy thing, there I rein in the impulse, well except for the Ash cameo. That might be why it's so hard for me to get through. )

I generally like parodies (Airplane, Police Squad/The Naked Gun, Monty Python, even the Scary Movie films). The good ones know how to take a standard situation and give it a funny twist. Stewardess tells the passengers to assume crash positions and the passengers take her literally, a gunman takes a person hostage so the cop does too.

As for non-humor meta... urgh... almost always feels like some college student learned that you can base a story on the fact that your story is a story, but then fail to come up with a story that supports the meta narrative itself. Yes, you need a story to support the meta-story that your story is a story. If this confuses you, you are not ready to write a meta-story.

I do have a love/hate for meta. When it's good, it's great. When it's bad... some poor tree died for nothing. Bad meta-humor is usually a cliched scene like, "That only happens in bad movies!" *pause* Actors look at camera. 99% of the time it does not work. Oddly enough, the other night I rewatched Top Secret! which did have such a scene and I laughed at it, but I think in that case it was because the situation they described was really over the top, unlike other uses which seem to excuse bad writing more than anything else.

I think your newspost is scattered because you're conflating meta and parody. Yes, there's an overlap, but you don't necessarily need one to have the other.

The old cartoons were very meta, especially if seen with certain old movies. Tiny Toons, Animaniacs continued that without the casual cruelty and eye rolling of more recent animated attempts.

You know I live for "meta". And good parody. I love the Scary Movie and Naked Gun franchises but especially the Hot Shots! It's all about picking and choosing what to demolish-- er-- deconstruct.