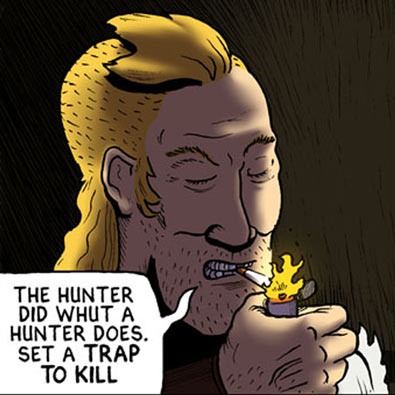 Clint returns to his po-dunk town with a hillbilly mullet and wild tales of war among the stars, blood, death, alien abduction, lizard-men, cat-people, and glory! Redneck is a wild SciFi action story about Redneck Clint who was abducted by aliens shortly after a hellish tour of duty fighting in Vietnam. He ends up fighting as a gladiator in an arena against otherworldly antagonists… the rest is history.
Redneck has an unconventional story structure, with Clint relating episodes from his adventures, not necessarily in order. The character “Hunter” is influenced by Jumanji, and Clint's adventures are reminiscent of Burroughs' John Carter of Mars. The art is heavily stylised, with flat digital colour. This is a compelling story!

Wow! What an incredibly well done write-up. Thank you :) my list of influences for Redneck is a mile long, but you definitely hit on two big ones for sure. The Incal provided a lot of inspiration too. Also Thundercats, V the Series, Usagi Yojimbo, TMNT, Star Trek, you see where this is going...

Excellent, congrats on the feature!

Such a great comic!