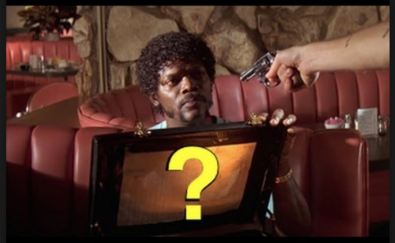 What's in the Box?

An iconic part of the movie Pulp Fiction is the McGuffin that Jules and Vincent deliver to their boss, Marcallus Wallace. It's a briefcase that, when you open it, glows on the face of the person looking at it and absolutely astonishes them. Is it some kind of treasure, or some kind of magical or fantastical artifact? We never find out. It's never revealed.

Alfred Hitchcock said the McGuffin is a plot device to get everything in motion, and that it doesn't matter what it is. Pulp Fiction brilliantly played with that notion. Mission Impossible 3 did the same thing, with everyone chasing the important item called “The Rabbit's Foot”, while never explaining what it was.

I wouldn't want this kind of thing done too often (at least not in the Mission Impossible way; in Pulp Fiction it was more of a subtle joke; in Mission 3 it was fun, but could also be seen as lazy writing if the trick were done too often).

But this topic really isn't about the McGuffin concept - it's just something that got me thinking about unanswered questions in fiction.

Breaking Bad came up in our last Quackcast and I said how must I like the ambiguity about Walter White's fall from grace at his old company - he believes he was betrayed by his old partners, but that's just his opinion, and Walter is not necessarily a reliable source on that. The series never answers definitively what happened there.

We also mentioned the Sopranos. A lot of fans were NOT happy with the series end; the fate of the family…and the Family…are never shown. Does Tony live or die? Is he arrested or does he go free? There was a lot of controversy among fans over that one.

The ending of the Blair Witch Project never reveals who or what was tormenting the lost campers, or what actually happened to them before they disappeared. And I loved it. It was chilling, and left it to our imagination. Not always the right move, but I think it worked perfectly there.

There was a scene in Stephen King's book “The Stand” where the villain prepares to have his Antichrist child with Nadine. She looks at the villain and starts screaming, but it's not revealed what she sees. She does end up pregnant, and the story does have an ending (which I don't really remember; it's been awhile). But what she saw is not revealed - probably mercifully.

In the classic “What's in the Box?” scene at the end of SEVEN, we kind of NEED to know the answer. And the answer is suitably horrific to measure up to the dread we're feeling during that scene, and to motivate the grim ending of that story. By the way, it's horrific without showing anything! But that's another topic.

It seems like overall, leaving certain side details unexplained is okay. Leaving certain motivations ambiguous or with several possibilities can work. Not answering the big plot questions in a story is probably a bad idea - or at least a lot more risky.

Having some mystery to a story, stuff that's never answered, can be a powerful way to make a story's world feel more real. It can also be a source of frustration to viewers and readers.

Have you left unanswered questions in your stories, either on purpose or by accident? Do you like the idea of leaving some questions ambiguous, or is it just lazy?

What are the unanswered questions you liked in fiction? Which ones did you hate?


Have a good day!

Kams box.. it could be anywhere with almost anything in it.. it's one of the great unanswered questions of duck where will that cursed box show up .. how did it get there ? what is in it..where will it go..

It was his soul in them brief case in pulp fiction. Maybe. Or a tuna sandwich.

In the anime Megalo Box the unanswered question is the real identity of Jo (the boxer). You never know his real name or anything about his history before the events of the show... You get insight into the other characters but never him. It's fascinating.

Life of Pi annoys me as the ending is often described as an unanswered question, but the tiger is called Richard Parker. If he wanted it to be open to question, why choose a name which as all about ending up having to eat each other?

The Swimmer. As Burt Lancaster makes his way home by swimming through his neighbour's pools, we get increasing insights into his character though the reactions of the people he meets but we never get the full story. It's as if the director abandoned a standard pot boiler plot and decided to start the film from the end. When Burt arrives home we see only the consequences of his actions and are left to fill in the blanks. I still think about that even though I haven't seen it in 20 years.

Being characters in Richard Wagner's Ring cycle is reason enough to banish anyone. Even Fritz Lang was brought low trying to translate it into a movie that didn't make you want to die from boredom. But I love the music. Maybe one day I could turn it into a comic. All those Viking outfits would work and Ragnar has one eye so he could play Wotan. I've always been a believer in NOT explaining something in a story that the characters take for granted. And only reveal things on a "need to know" basis. I know how stuff works as the author but the audience doesn't need to know.

I think the lady or the tiger is the best unanswered question in fiction. ;-) As for unanswered questions in my comic, probably the biggest is why were Gertrude, Brunhilda and Nikki banished to Midgard. Even they don't know because when Odin gets mad his words kind of run together and he's hard to understand. ;-) On the other hand, I think keeping it vague works as it's just backstory. If I actually figured out what it was then there's the risk of it becoming a quest that has to be solved so the girls can become full Valkyries again, and that would be boring. ;-)

I'm all about ambiguity. Covers up mynpoor writing skills and inability to come up with satisfying story conclusions. There's also my love of the Twilight Zone, Outer Limits and other anthology series. I think I'm one of the few that got and loved the ending of Tim Burton remake of Planet of the Apes.

I have to say, I generally gravitate towards narratives which leave things open. Two works which expanded my mind in the late 90s were 2001 and Evangelion, and both - to different degrees and different ends - play with mysteries. In 2001, mysteries are very effectively used to convey a sense of existential wonder (the "big questions" will always be fundamentally without a final answer), whereas Evangelion turned out just not to be "about" the plot, but about the characters' psychology (and about how the protagonists are caught in unfathomable proceedings, so the viewer can empathize), so in a way explaining everything was beside the point or even detrimental.

The ending of The Birds movie and the original Triffids movie/series/whatever it was. Yeah, I sort of did that with the jade Buddha statute in Pinky TA 6. It was just lazy writing then XD