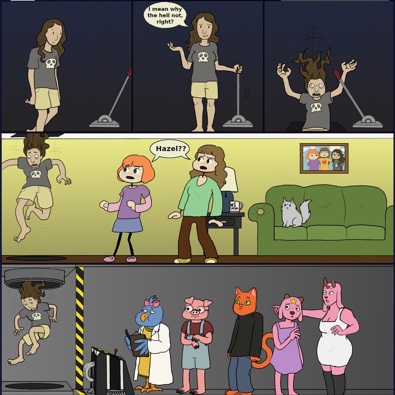 SG, a teenage girl, is on the lookout for her missing boyfriend but finds herself in the clutches of a mountain lion instead. Following her earthly death, she finds herself down the rabbit hole, greeted by an assortment of Eastern and Western deities until she spawns somewhere in Wisconsin greeted by a bunch of laid back hippies that enjoy a far out time and Led Zeppelin music. It turns out that the shirt on her back is her most important ticket to the afterlife.

The art is drawn in digital color. The story is told in a full-page comic layout.

Figure out the true path after this life and read Feint by stonedraccoon, rated M!

It IS a really fun read.