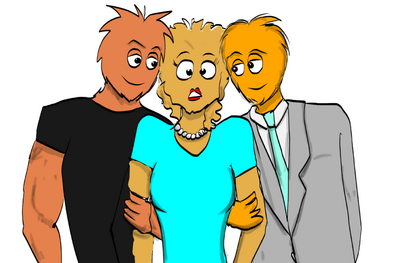 On the ‘terrible writing advice’ youtube channel, one of the running jokes is the over-reliance and overemphasis on love triangles in bad fiction.

Are they automatically bad, though?

They can be. If a character's main problem, regardless of genre, is having to choose between two highly desirable, amazing partners who are madly in love with them, a lot of readers will tune out. This problem is
exacerbated if the main character is described or shown to be dull, boring and bland…and able to attract all this romantic attention by doing nothing.

People like this stuff. I'm not studying genres and sales figures, but there are certain things that are written because they can be very popular! Like I said, some readers will tune out, but others will be all over it like…well, like a lovelorn member of a love triangle!

When one person loves another, and that person loves a third person - well, you've got conflict right there! And if the reader cares about at least one of the people, or two, or all three…well that's what you want! That's probably a better triangle than the “choosing between two amazing lovers” version.

Personally I don't have a problem with it as a trope. It can be done badly, or it can be done well - and to me it can be a handy device to create tension that is very relatable!

The endless tension in the Archie/Betty/Veronica triangle has kept that series alive for many decades. The various triangles in Marvel Comics, too, have helped give humanity to various characters. The early one was Reed Richards, Sue Storm and Namor, then later there was Cyclops, Jean Grey, and Wolverine.

And many, many others!

I've played with the trope a bit in my comic, here and there. It's fun!

So what do you think? Dead trope? Lame trope? Or something that can give a little juice to your genre story?
Any particular triangles you've enjoyed? Hated?

Have a good one, wishing you all the best as always!

*you love her, she loves him, he loves somebody else, you just can't win." Triangles are just too neat. Every body is all over and there's tons of heartbreak all around.

I personally find it interesting when done right, but I don't "like" it. That is, I find they are one of those things that are important in writing as they show readers what not to do when in love. If you can't choose between two people or fall in love with another lover's person or fall in love with someone while being in a relationship, this is a bad thing that should not be encouraged because the consequences are dire. In any case, everyone loses. With that said, I would write a couple like that just to show that it's not cute and it leads to nothing but trouble.

I honestly very dislike "terrible writing advice" because it has a very fanfiction view of the creative process instead approaching it like a professional, as in instead of thinking of a way to approach an old trick in a new way or should something be laid to rest for a while until it's new again, it's "NEVER USE IT, EVAR!" Also on their Realism art episode, Nobody, and I mean NOBODY, draws like that in real life, ever!

I love this stuff ;) even if it's very common and predictable XD

Another vote for the cover image here! This is one of those tropes that can be terrible (often when it's done because it's popular) but has the potential to be great if it's written well and feels genuine. For that reason you'd think endlessly sustaining the triangle would be a bad thing, but the Archie example seems to prove otherwise. Some stories, particularly some comic ones, exist in a world where a comfortable lack of change is desirable. Stories and conflicts come and go, but we want to end up in a reassuringly familiar place at the end of them. The characters never age, and the eternal love triangle is the promise of never having to reach adulthood.

To be fair, I hate all "budding romance" arcs. I enjoy "couples dynamics" especially between spouses, but the will-she-won't-she stage annoys me to no end.

I love the cover image BTW!

I think the Bad writing advice channel jokes about it but considers it another tool in the box. They can be overused in some types of fiction though, as the only form of tension.

I like a good love triangle. Sometimes an old trope is a good trope. Give a man enough trope ...