No Antagonist, No Arc 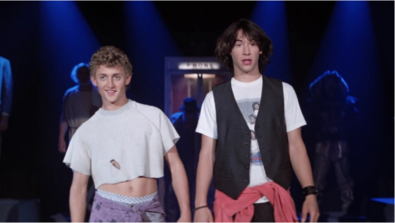 I grabbed the Bill and Ted's Excellent Adventure and Bill and Ted's Bogus Journey 2-pack and rewatched then after many years. I knew those movies well when I was a youngster, especially the first one. Many, many repeat viewings. Both movies held up REALLY well, and feature “Fool” Protagonists like I talked about a couple of weeks ago.

Another feature of the first movie is that there's no Antagonist. This concept first came to my awareness when I read Leonard Nimoy talking about Star Trek 4 (the whale one, where the crew of the Enterprise travels back in time to the contemporary world to collect some whales). Nimoy directed that movie, and was also involved in the story development (I think the whole thing was his idea if I remember right).

His notion was that they'd gone through a dark journey, with deep stuff happening, revenge, growing older, and themes of death (and then rebirth), so he thought it was time to lighten up. A lighter story, with no Antagonist and more comedy in it. The “no Antagonist” thing caught my eye.

While a Protagonist always has to be a person, which means an individual being of some kind, even if they're not technically human, an Antagonist can be an individual, or a fairly faceless group…or a force of nature. Or even just a ‘race against time’.

That's what's going on in Bill and Ted's Excellent Adventure - it's a race against time.

This approach works most easily with comedy, I'd say - and often shows up in TV comedies, where the Protagonist is pitted against their own flaws and sometimes the absurdity of their goals rather than an actual Antagonist.

As a side note, the rewatch of the Bill and Ted movies got me very excited to see Bill and Ted Face the Music in about a week. Looking forward to that!

My own comic often has stories with no Antagonist. How about yours?

In our daily lives our "antagonist" might be a faulty computer mouse, a tax return that needs to be filled, a painful stomach, a sore back etc... All seemingly really boring for stories, but you can easily make interesting stories about any of those things as anyone who's seen "Food Wars", "Haven't You Heard? I'm Sakamoto", "Hikaru no Go" or "Barakamon" can attest. You can make extremely interesting and compelling stories out of the most mundane things and it doesn't have to be comedic.

I think its easier to write an antagonist as a person or a person with an ideology that can be examined one way, rather than taking on the ideology by itself and all its permutations in which it can be interpreted.

I usually prefer stories with an actual antagonist person of some kind, it feels more personal and exciting to me. However I understand that not every movie needs to have an antagonist, and that no antagonist is much better than a really lame one. I thought How to Train Your Dragon was way better when there were no human villains, that said, if the villains had been written better I might have loved it even more than the first.

Excellent article Banes. I like to think that the main antagonist in my story isn't a person, but an 'ethereal' thing that drowns you down as the story goes. This thing is what gives the name of my comic : "the Gloom". No one in the story has a bright future, at least for now.

Time can be an antagonist. In the end it's the ultimate antagonist for us all. The race we all lose. (Except me, I will live forever!)

"no antagonist = no conflict = no story" - that's the usual mantra, isn't it? It's a good idea to question this kind of thing sometimes. You may argue that something will always be the antagonist by necessity - even abstract concepts or the protagonist's inner struggle qualify. But what if you have several protagonists who antagonize each other, so it isn't that clear-cut and you can't reduce the plot to a simple, two-dimensional good/evil scenario? (note: Make it difficult for the reader to take sides, then. They're bound to try.) I don't really bother with antagonists in my comic either, as in labelling someone as "the antagonist". Instead I rather think of protagonist/antagonist as a role that a character assumes depending on the situation - just the way we all switch roles all the time in everyday life. (If you think that sounds schizo, look up "role theory" on Wikipedia and you'll find that on the contrary life would be decidedly creepy if we didn't.)

I don't know. I'd think the probe which is screwing things for the land-based lifeforms on Earth at the beginning of the movie is an antagonist, it's not just one that Kirk & company deal with for most of the movie, but without it's actions there wouldn't be a movie. There are also obstacles throughout the film which may or may not rise to the level of antagonist.

Hmm, interesting! Yeah, it IS good in a comedy and other stuff not to have an antagonist embodied in a person or monster... It makes a realistic, identifiable story because I don't think you encounter as many situation and conflict in real life where the antagonist is a person... I mean, you DO, but more likely it's yourself or a race against time as you say.