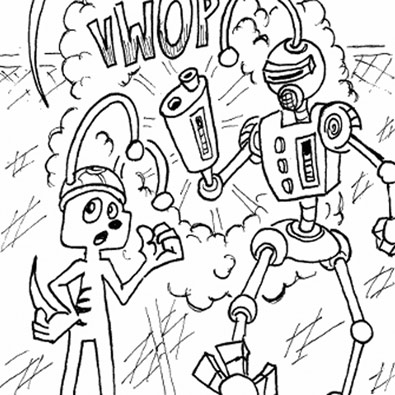 Lord Ziot is about to have a bad day… actually, and extremely bad day! He's come down to earth looking for a very powerful helmet that increases the wearer's intelligence and abilities as well as allowing them control of all sorts of alien hi-tech stuff, but before he can get his big fat alien hands on it a naughty little Tasmanian tiger rushes in and gets there before him. Then things go from bad to worse. But not for the plucky little Tassie tiger! This is a fast paced action adventure SciFi comedy, featuring great chase sequences, space warships battling it out, fighting robots and plenty of laughs from the helmeted Tassie tiger and the enraged Lord Ziot! This is a pure black and white comic with great consistent stylised artwork.

Doesn't take long to read either!