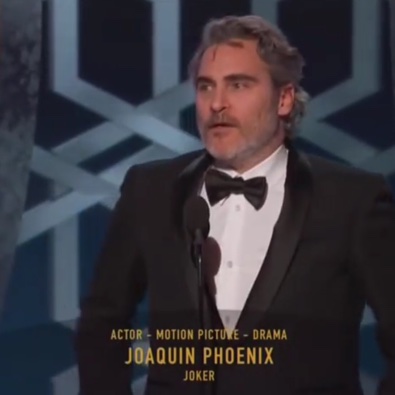 After playing the polarizing role of Joker in the film, Joker, Joaquin Phoenix has just won the Golden Globe for best actor in a drama. This awards season has been awarding Phoenix for his role making this awards season rather off-kilter. Phoenix played Arthur Fleck, the troubled stand up comic who had his medical insurance canceled, resulting in getting him on a dark path in Gotham City.

In addition, Joaquin Phoenix shares the Golden Globes spotlight with Hildur Guðnadóttir, composer credited with creating the original score, a somber accompaniment to several of the film’s most poignant scenes.

The two Golden Globes that go to Joker sets a record for the most Golden Globe awards given to a comic book related movie.

Unfortunately, the Golden Globes aren't really a very respectable award and haven't been for some time. Joaquin Phoenix is an excellent actor, but I can't imagine this is a project done for much of anything but "they paid him enough and he did the film".

All as it should be in my opinion:) Joker is one of my two favourite theatrical films of the 2010's, the other one being Mad Max Fury Road:)