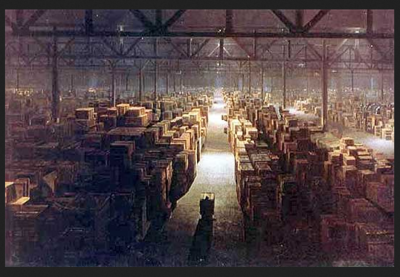 I'm not sure if everyone knows this already, but a MacGuffin is a term that was made popular by Alfred Hitchcock, and is now widely used in writing and storytelling circles.

It is an item or event (or possibly even a character) that exists only to trigger a plot or to motivate the characters in a story. It's something people might be trying to get, or keep, or find, or protect, or stop.

The MacGuffin often appears during the first act of a story, then disappears until the last act.

Hitchcock said this about the MacGuffin: The audience doesn't care about it.

It shows in Spy movies, Thrillers, and action-adventure type stories.

The Ark of the Covenant is a fantastic MacGuffin, and I would say that the audience somewhat cares about it, and are intrigued by it. The MacGuffins in the other Indiana Jones movies are less compelling - one is even the Holy Grail, which is considered to be an early example of a MacGuffin.

I'm not sure how well liked this was by most audiences, but in Mission Impossible III, there's a MacGuffin called “The Rabbit's Foot”. It's some piece of technology (maybe) that is vitally important to the villains and heroes, and everyone's running around trying to get it. But The Rabbit's Foot is never explained, even a little bit. Nobody ever says what it is or what it does. I thought it was a great movie, and since I knew what MacGuffins were, I got a big kick out of that subtle joke. The story works completely fine without explaining what the MacGuffin is.

So you can kick of the plot and motivate your characters by something - but that something can be totally irrelevant to audiences.

I've used a MacGuffin at least once - TK's missing videocassettes in one of my issues of Typical Strange, TAPEHEADS

What kind of MacGuffins have you used in your comics?

A movie theater I frequented in Hampton, VA had a bar inside called MacGuffins.

I always thought the perfect macguffin was the Maltese Falcon. The plot is about the characters relation to it and because of it. But the statue does nothing. It's just there to start the scheming and plotting to obtain and possess the black bird. It could be anything they're all going for and it wouldn't matter. That's a macguffin in its perfect sense. If there's some thing in a story of mine, it better have some intrinsic role to play in the plot as opposed to being a thing. Don't get me wrong, it can make for a great story about people and what they do around the macguffin but I don't see the point if the macguffin doesn't do anything but sit there as a priceless thing everyone wants.