QUACKCAST 463 - Sexposition is not a new thing 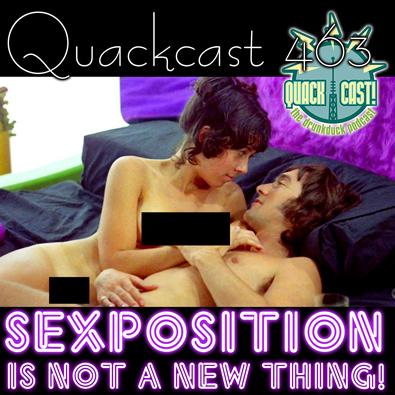 
Sexpostion is sex plus exposition, it's exposition with sex on the screen. Tantz Aerine addressed the topic of sexposition in an article last year, but what we're doing here is talking about the reason it even exists, why it isn't a new trend, and why it probably won't last.

The main reason for the current trend of sexy stuff in TV shows isn't a reflection of modern culture in general, rather it's because broadcast standards for streaming content are loose because they haven't caught up with it yet. The sex and nudity is there because they can get away with it, same as has always happened in the past when standards and the rest of culture hasn't yet caught up.

Some subjects we touch on are… a tangent into musicals, the sexposition heavy Australian TV sows Alvin Purple (1970s), Number 96 (1970s), Chances (1990s), Art house film directors like Almodovar and Fellini, and various brief mentions of modern TV that reintroduces the trend such as Deadwood, The Deuce, West world, The Witcher, and of course Game of Thrones.

This week Gunwallace has given us the theme to ACCIDENTALS: A gathering of titanic forces, powerful energies coalesce, let the epic battle commence. Dark times lie ahead for earth's mightiest heroes. This is an orchestral war anthem for superhumans! This theme would go perfectly over the opening credits of an A grade superhero film!

It may be good to point out as well that people "catching up" isn't a good thing -- it just results in censorship, control, and huge already-wealthy companies trying to wring out all they can from something they don't support and will try to destroy once they've got all the money they can get out of it. Every single wave of censorship cracking down on a sex-positive, nudity-positive expression of art has been the villain in history and has not stood the test of time. Repeating the same toxic cycles will not somehow lead to a different result.