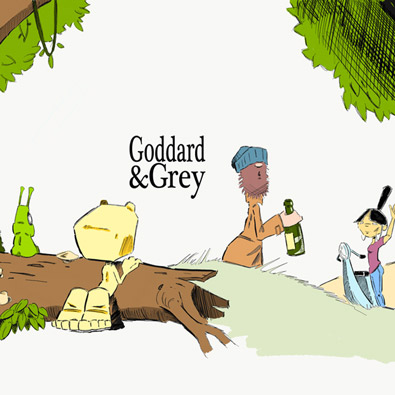 Goddard is a peripatetic chap who's suffering the temporary embarrassment of a lack of lodgings… The poor fellow finds himself living rough, homeless in other words. But things change for the better after he hooks up with Grey, a fellow resident of the park they both share, but a resident who originates somewhat further afield! A VERY long way it turns out because Grey is an alien from outerspace. Goddard and Grey make a great pair- Grey gets help learning about the earth and Goddard gets free food and a couch!
This is a newspaper style comedy comic strip with a small but fun cast of evolving characters and some good jokes. It looks nice and professional, mostly in black and white but more recent strips are in colour.

It does have a print-syndicate quality to the art style.

I'd read this in a newspaper :)