Help Fund the Epics of Enkidu on Indiegogo! 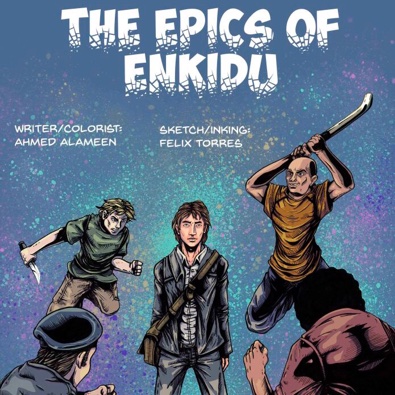 The Epics of Enkidu features a hero with Autism in what could be the sequel to the oldest story found in human history.


My name is Ahmed Alameen, and I am from Iraq. I am also the uncle of the kid who inspired me to create this comic and to help spread awareness about Autism through a unique story. I have published novels under the pen name A. H. Amin and became a national best seller with my fiction thriller, Psychs. As a comic artist I worked on motion comics before I finally decided to create something that represented a neurodiverse character in an Epic story.


My story features a superhero with autism. We decided to create a campaign that help us not to just tell an engaging story, but also to spread awareness and to help people understand more about Autism, which is our main motive to push this campaign.
By funding this campaign you are creating a great contribution to the autistic community and to the people surrounding them. You will also going to revive the oldest story ever found in human history; The Epics of Gilgamesh, and make others become more interested in history and ancient stories that withstood the test of time.


We will present a couple of tempting perks ranging from copies that are either digital, hard copies, or signed copies, to bigger perks such as a poster, a very cool T-shirt, and the cherry on top, a chance to have a character named after you… that's right, your name in the sequel to the oldest story found in human history.
Of course if we weren't able to reach our original goal, we will either use what we have to create the comic and publish it online and on print-on-demand online stores. And if we couldn't have enough to create the comic, then the funds will go into supporting Autism.


If you want to help make a difference in the world, you can contribute in anyway, even your time can be enough to create a big difference; a simple click and share can have a butterfly effect that can lead to bringing a unique story in the hands of an autistic person and make them believe that they are unique too.


The Epics of Enkidu on Indiegogo link:

Awesome! I backed it 😁