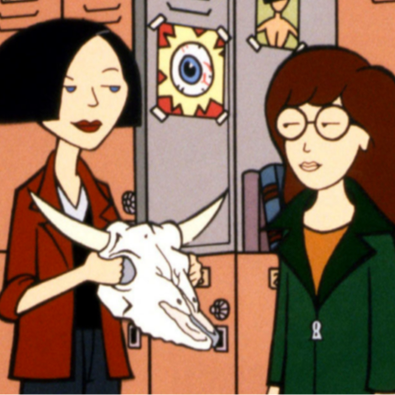 In the late nineties, mTV answered the call for the need of a high school student that was not centered around the cheerleading squad or the football jocks with Daria. Luckily, I was in junior high, living in the Southern California suburbs around the debut of the series, which meant I was in the center of trends, cliques, and peer pressure.

Daria Morgendorffer was a new student to Lawndale High school, she had a sister who was über popular with the coolest groups in school (the fashion club), she had one best friend who was an art student, and had a crush on said best friend’s brother, Trent.

In a way, Daria was my favorite type of entertainment: it was smartly written, its references had multiple layers that went beyond a typical cartoon geared at young people such as having low self-esteem, eating disorders, and how to handle falling for the same person as your best friend. It was also. Very helpful for me when navigating the social scene in high school because it taught me it was okay to be different and not join a herd because it was cool. Daria was labeled a social outcast, but she also seemed like the most level-headed person on the entire show, therefore, teaching me that being weird or different was not a bad thing.

From a historical perspective, Daria was released around the time that strong female figures were taking on prominent roles in television shows and movies: Reality Bites (1994) was about a female generation-xer, who had to decide between a yuppie and a grungy guy; Before Sunrise (1995) was about an intellectual female as she engaged in a day-long conversation with an American college student on the streets of Austria.

Daria taught me the valuable lesson to always be honest with my own identity. It helped me navigate through my own social mazes throughout high school and college and I am very thankful it existed.

Watching cartoons can be life changing!

It's funny to look back at the kids as idiots and the parents as long suffering! XD

@bravo1102- In 2020, as a 34 year old, I am rewatching Boy Meets World and instead of looking up to Corey, Topanga, and Shawn, I completely identify with Mr. Turner’s mentor role as a teacher and the other adults at the school way more than the kids.

@bravo: Square Pegs! Yeah, that's the age-equivalent for my life in terms of social outcasts being the heroes of the show. Totally! Loved Daria, the show, but, yeah, as an adult it had a different edge to it. Daria, the character, reminded me of how we always seem to know everything as a teenager, but I was a clueless adult who only knew what he didn't know by then.

In 1997, I was 33 years old so I kept identifying with the adult characters who were invariably stupid and clueless. I used as a guide of how NOT to be as an adult dealing with teens.

Daria was special to me because I kind of identified with Daria. She wasn't quite the nerd, the tomboy or anything like that. She was just a misfit for being herself which is what I was in high school (which was hell for me back then). I also loved Daria because even though there were times she desired to fit in, she never caved in at the cost of her identity.

That theme song was slammin' too. "You're standing on my neck.... la la laaaaa laaaa laaaaaaa..."

Loved Daria. It was amazing back in the day. Still hate Tom though, he was a dick. He turned her bland.

Always wondered how much influence the very brief run of Square Pegs had on Daria. Or even the success of Clerks. If only MTV had picked up the animated Clerks cartoon.