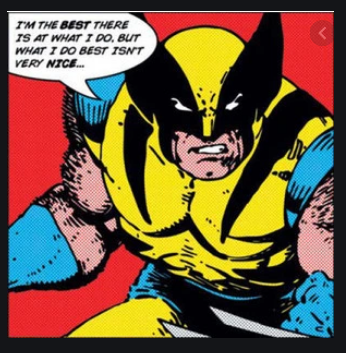 Plenty has been said about giving characters flaws - we've talked about it around the site, on the Quackcast and out loud, to ourselves, on the bus and in the park.

But something I've thought about more lately, in the years well after starting my comic, is to give characters powers. Not necessarily superpowers or magic powers - maybe more accurately, to give them strengths.

This is something I've done much less in the stuff I've written. I'm still just getting started, as far as working on it with characters I write now.

Let me be clear - this CAN be superpowers or magic powers. It can also be a skill they've developed or a natural “gift” that they have.

It's finding something that your character is REALLY REALLY good at. Maybe they're “the best there is” at it. This is handy to figure out, whether you're working on the Protagonist, Antagonist, Love Interest, Villain, or whomever.

This can be corny maybe, or it can be done awesome. Even corny can be awesome.

It can give a reason why we should care about and follow your character/characters, and be on their side.

Dalton from Roadhouse was the best at what he did (controlling violence in bars - a specialized field). Jack Bauer, Batman, Beatrix from Kill Bill - they all have skills - prowess or gifts that make them stand out from the crowd. The best of the best in their fields.

Even outside of the action or thriller genres, this can apply - there is a school of screenwriting thought that any Protagonist should be the best or extremely accomplished or skilled at what they do.

As with all writing “rules”, this is not actually a rule. Melvin from “As Good As It Gets” is a bestselling novelist. Good Will Hunting is a diamond-in-the-rough-genius.

Romantic comedies are full of people who are very successful and capable at their jobs - or maybe capable pick up artists like in Hitch, Alfie, and movies like that. These gifted heroes in comedy usually have a lot of growing up to do, but start off gifted at what they do.

The skills can be something like the most tenacity or never-give-up…itude…{?}

Again, it's not a hard and fast rule at all. But as always - good food for thought.

Do you think you care more for a character with some impressive skill or accomplishments?
Are your main characters particularly gifted in any area?

yours with a special set of skills,
Banes

I like this way of approaching it. It's a more constructive, positive method, which I find tends to make people have to try more (or in the first place) to actually accomplish something. It can tell you so much about a character to find those things, and it's wholly a constructive process.

I think one point of having a character who is "the best there is" are the folks who make it their business to take the best down a few pegs. One example is James Bond. He comes out on top and is pretty damn good, but he knows deep down that a lot of his "being the best" is a bluff. When the franchise has strayed from that is when it has been at its weakest. Nothing is ever perfect, so there's always doubt. And when something really is the best, there's going to a pile of folks willing to spend a lot of time finding ways to bring it down.

Btw, I did set my characters in Used Books up as excelling in certain ways. Challenging those strengths was boring, so I mostly set up obstacles that expose and test the weaknesses instead. :P

Characters who are "the best" at something are part of the wish fulfillment projection. The "men want to be him" characters like James Bond. Now, James Bond is fun to watch but not really a sympathetic character. He comes across more like a cartoon, and that's, honestly, just fine for the franchise. Some fiction exists to escape reality, not trigger emotions. Characters portrayed as "the best" distance me a bit, and there's a Mary Sue-ness about them, especially if the story makes it a point to overtly say they are the best and have other characters talk about it. (Really fits right in there with "chosen one" stories.) However, if their skill is not directly acknowledged or if it is itself a burden or challenge, it can be more endearing. As a major fan of fantasy realism, I love "super powers" that don't turn a character into a "super hero" but instead are just kinda awkward and messy and ARE helpful but not a cure-all.

This is a trope in westerns. The fastest gun is always being challenged by someone who wants to be the fastest. There's also the peace officer who's very good at establishing law and order but there's no peace for him.