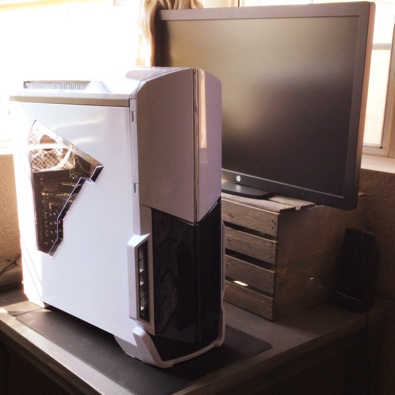 There are a lot of discussions pertaining to the idea that artificial intelligence and brain implants will be a huge part of the future. Cyborgs are a topic demonstrated in science fiction, such as when the Borg assimilated Captain Picard and seduced Data in Star Trek. It is argued that we already have become Cyborgs—externally—with the devices we carry such as a phone or a tablet or a desktop computer.

My last PC is twelve years old. It was able to run photo editing software and carry me through heavy usage from 3D Rendering programs one decade ago. In fact, it was the first computer that I could honestly say had the ability to keep up with me as I learned how to use new software. Unfortunately, hardware becomes obsolete, fans get filled with dust, software gets upgraded, viruses and trojans get stronger, and operating systems get updated. The reality that the Internet has become lightning speed began to set in and it was time to get a new machine or else I was going to stay limited with technology that was over one decade old.

My new machine is a gaming PC and has 8GB of RAM, on the low end for newer machines, but I used to run machines with less than 1GB; a 1TB hard drive, double the size of my previous one; and an HDMI video card input jack, rendering my monitor practically useless for the time being. I want to invest in a couple of upgrades, but as it is, this computer has enough power to keep up with the demands of today’s technology and streaming speeds. It has the quietest fans and when it is turned on, I can hear a pin drop.

I felt limited in what I was able to accomplish with my older machine, especially now when the majority of our daily interactions take place behind a screen. It felt like a PC would be a worthwhile investment if we are, in fact, all slowly becoming cyborgs, or at least some variation of a Mecha.

I participated in the video call for the 500th Quackcast Episode on Saturday morning. Many of the participants on the call were individuals I have known for years, mostly from the comics they have created, or the comments they have left on the front page or written in the forums. It was an exceptionally interesting experience meeting and talking to some of the comic creators from this site, in real-time, for the first time.

There were comic creators representing different countries from all over the globe, and I am whole-heartedly appreciative that English was the universal language spoken, even though it would be amazing to converse with everyone in a variety of different languages.

Thank you, to all, who woke up in the early morning hours of different timezones to join in on the conversation.

@Kawaii- RedDeadRedemption 2 looks amazing! I still need to play that one!

Joining in the Quackcast was a blast. It was really nice to meet you all in person. My app froze one or two times, which is why I sometimes missed a few minutes and had to get back into track again. I very much enjoyed it all the same.

Any new games with your new pc, Kawaii? "Ark-survival evolved" is a fun one! ;)

On the computer desktop. I just gutted mine and put new parts in it. My ATX Case costed me $150 at the time and I still love looking at it. 3 sides with a mirror finish with sound proofing siding. I cleaned out my fans, put new parts...brand spanking new Desktop. Quack Cast 500: I totally wish I could have be there. Had to work. I know you all would have love the voices and accents I could do. Maybe one day when I get a Saturday off, I’ll join you all. Keep up with the great work Team DD. I’m Always listening. Can’t wait to hear Quack Cast 500!

The 500th Quackcast was great! Always awesome to see all those faces and hear all those voices. Your comp looks really cool Kawaii!