Hidden Horror - Lifting up the Rock 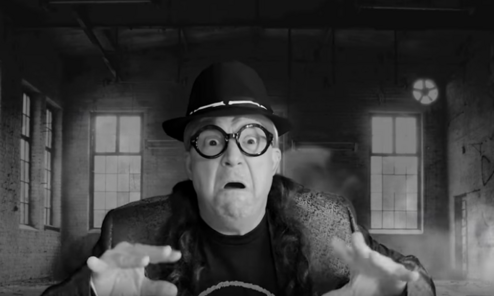 On our last Quackcast I had a realization about one of the recurring elements that shows up in a lot of horror I like.

It's the hidden nature of horror. When someone, or something, appears normal or even extra sweet or appealing, but hides nasty stuff beneath.

It's in the compelling-in-grim-way idea of sociopaths and psychopaths, mixing in with everyone else, appearing completely normal but with a different nature to them. A dangerous one in some cases.

That concept exaggerated for fiction would encompass people who are possessed in some way, or doppelgangers of the people we think we know. It's the basis of the effective horror of The Thing, and the chilling concept of Invasion of the Body Snatchers (though I've seen a few versions of that story and in execution I've never found any of them scary in the least.

It might relate to the masked killer genre I enjoyed so much, and in scary clowns, where the surface is happy and appealing (at least they're intended to be) with a gruesome reality behind the mask.

It's in the seemingly normal, upper-class types in Rosemary's Baby and Get Out who conceal a disturbing reality.

Or the normal suburban environment in Halloween where Michael Myers quietly stalks.

Some environment that's creepy from the get-go might be able to tell an effective scary story - but to me it's more rare for that to be effective.

It's the person, or people, or the house, street or town that seems normal, seems like one thing…

It applies to music too - some of the horror flicks I saw as a kid would start not with ‘scary music’ but with gregorian chants - or I guess choral music, in latin. Automatically creepy.

There's a song about monsters that's performed in a cheerful way, with a light comedic touch, but it's
very creepy and perfect for a horror movie theme: https://www.youtube.com/watch?v=u2UPvqpGPSM

Granted, this is such a common element in all genres - we start with a surface understanding of people or situations or the environment and we learn more truths as we go along.

But it's extra powerful when a normal or even extra appealing/attractive hides a terribleness underneath.

It's one of the deep reasons that horror creeps me out: the idea that horrible truths are hidden beneath a plain or pleasant exterior.

It's also, i guess, one of the lessons of the horror genre…


have a good one!

Also, I instantly thought of this music video for some reason: https://www.youtube.com/watch?v=sRWMwpPlm28

This is the kind of horror I like best. I'm not really into the "how can you tell reality from your imagination" type of story, which this can sometimes drift into, mostly because they often overdo the stream-of-consciousness, but I love all the other ones either for the plot-twisting surprises or the general weirdness that ensues. It's very relatable, too: never take anything at face value unless you really know you can. For an interesting take on this very topic I'll recommend "Killers" by Mike Mendez. It's an independent film and not for the faint-hearted, but the way the already twisted initial situation gradually shifts into a weird inversion of itself as more and more things about the characters come to light makes it one of my favourites (and I hope I managed to say that without creating spoilers).

Oh yes, it's marvellous when you have that primal, gut-feeling horror. I do love the "lifting the rock" sort of build-up and reveal, at least when it's done well. It can be so superb when it's built up to an insane atmosphere, and then it just...bursts. Whistle And I'll Come To You is one perfect example of that. Look up the 1968 Omnibus version with Michael Hordern, or read the story. Perfect stuff! You simply won't get much better.

Gregorian chants or choral music (ESPECIALLY in Latin) usually means that there is some demonic energy brewing--they like to speak in Latin. I definitely do enjoy the Patrick Bateman from "American Psycho"; Norman Bates from "Psycho"; and Hannibal Lecter from "Hannibal" (tv series) type of character where a person looks and acts seemingly normal on the surface and in public, but it is all a facade for the tip of the iceberg.

Always see it in newscasts. Such a quiet person, keeping to themselves never could have imagined he was behind all the disappearances.

Haha, I never liked that trope in horror and scary films... I suppose that is just a symbol for normal like though: Most people seem very nromal and ordinary on the surface, till you get to know them and see the weirdness beneath!