FEATURED COMIC --> How Blade Got His Name 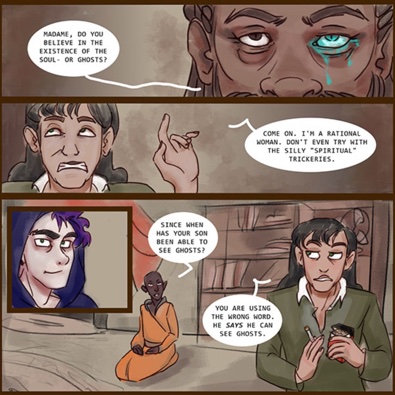 Blade Slayer has always had his own set of disturbances ranging from hallucinations to manifested hauntings that were eating him alive ever since he was a young boy. His mother, a true non-Believer and skeptic in the Spiritual world, is not one to believe that any of her son’s trials and tribulations have anything to do with the Spirit Realm. However, after meeting with two Spiritual guides one evening, Blade is about to sever the symbolic cord that has tied his soul to his mother’s soul ever since he was a boy.

This comic is a prologue to Lucifer Experiments, which is also created by sitnuhe currently in progress. This comic is characteristically drawn with the look of traditional pencils and it is colored digitally using texturized paint tools. The color palette gravitates around neutral and Earth tones giving the pages a soft and gentle feel.

Learn the origin of Mr. Slayer’s name and read How Blade Got His Name by sitnuhe, rated T!