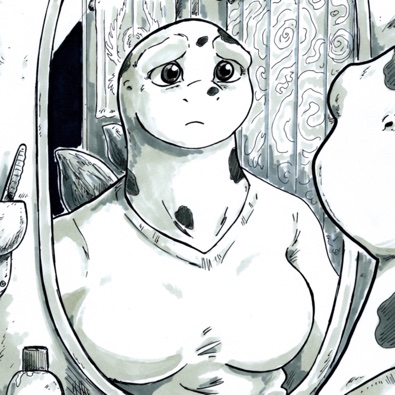 On the anniversary of a very somber occasion, Sako, a stegosaurus with an online personality and her own vlog, decides to take a walk instead of spend an entire day on social media. This comic brings the realities of creating an online persona and all the comments and criticism that goes along with being an Internet celebrity. Another aspect of this comic is the overwhelming depth and emotional intelligence that goes into Sako’s recorded conversations and how she strives to spread a message of positivity to the world without ever expecting anything in return. This comic will teach ideas and thoughts that would benefit anyone willing to take the time to read them.

The art is predominantly drawn in digitally sketched out black and white comic pages. Sako is an anthropomorphized stegosaurus who exists in a world very much like our own.

If you are searching for a spring of Moral Support, then read
Good Words with Sako The Beautiful Heart of a Steggo Girl by KaijuKid, rated T!