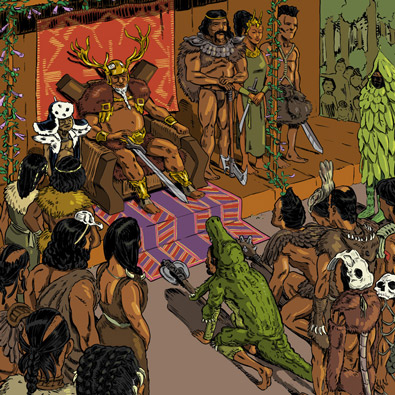 In an ancient, barbaric land, one man stands out as strong and good above the rest, Prince Ovun. Coming across the sight of a poor old man being harassed by brutal thieves, Ovun takes action and saves the old fellow, who then predicts Ovun will soon be king of his people! This is a tale of strife, battle, war and blood as the humans fight against the ravages of the horrible creatures of the darkness and revel in the worship of their new gods! The art is all digital, highly stylised and in full colour. Much of the story is told in images along with minimal text. It's an adventure fantasy story. Warning- some nudity!

Been following this comic for a little while, glad to see it finally getting the recognition it deserves. Congrats!

@kawaiidaigakusei, thank you very much! Hope you check it out again in the future: the tone will change, storytelling will slow down considerably and it'll be a lot of fun, if I do say so myself!

@Boy Phaff— I just checked your comic, incredible inking and hand-lettering, I am very impressed!!

The story is a roller coaster!

Hurrah! Thank you very much for this feature, ozoneocean! Man, it could sure use some more readers, for goodness sake. The art is, by the way, all brush and ink, lettering by hand, the colouring is digital. Hope people enjoy it, the story is about to change course, seriously!