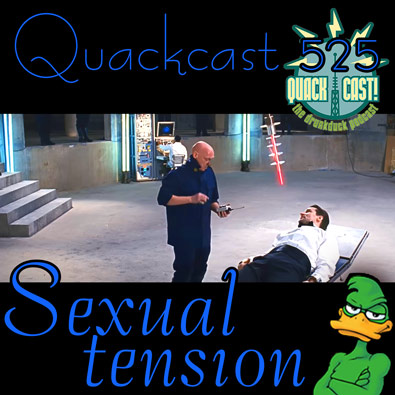 LISTEN on our new player!
Listen on Stitcher ​​- https://www.stitcher.com/podcast/drunkduck-quackcast
Or TuneinRadio - https://tunein.com/podcasts/Books–Literature/Drunkduck-Quackcast-p1150194/
Image from Genghis Khan by Miike Snow.

Sexual tension between characters is a great way to augment the conflict that drives a story. The audience really wants that to resolve into a relationship or at least an assignation of some sort… The longer it goes on though, the bigger they want the coming together to be, which can be dangerous for the creator because it's so easy to disappoint. it's usually better to resolve the tension earlier than later, OR keep it going forever but keep it interesting and don't ever sour it or make it turn stale.

Some noted and classic examples: Moonlighting was famous for its great sexual tension and the terrible way they flubbed it, The X-files did the same sort of thing, basically they both left it too long before getting a resolution to it and ended up disappointing viewers. Tenchi Muyo is one of the originators of the classic “harem” anime genre, but unlike later copies it generally handles the concept well, not favouring a pairing between any of the characters over much. Cheers and Friends are classic American sitcom versions of this style of story telling. The cover image is from the music video for Genghis Khan by Miike Snow where a James Bond and supervillian style characters are depicted as suffering the throws of sexual tension in a beautiful piece of comic story telling.

This week Gunwallace has given us the theme to Golden Spiral: This reminds me of the start of Forever autumn from Jeff Wayne’s The War of the Worlds. It has the same sort of energy… a beautiful melancholy tune with a slightly threatening, unsettling feeling… maybe a use of tritones?

The evil female trying to change and convert the hero and defile him, making him like her, thats my kinda romantic tension, I just LOVE that!

It's also important, when dealing with sexual or romantic tension, not to be lazy and use shorthand too much. Just having two people, one male and one female, interact is not enough, but plenty of stories think that it's completely sufficient...and thus, the story is BORING, like most harem anime, which usually revolve around heterosexual norms. It goes especially wrong when the bland main character the predicted viewer is supposed to identify as is as boring as Tenchi in most of the output for that series. The largest problem with Moonlighting was definitely the behind-the-scenes conflict between its two main stars, which wasn't so much a flub as it was just life happening. Fortunately, this is unlikely to turn up in comic authoring. Frankly, though, while I am all for sex and sensuality, I think most stories lean too heavily on sexual tension between their characters. It's rarely needed and tends to lead to problems down the line, and it usually isn't done very well or maturely.