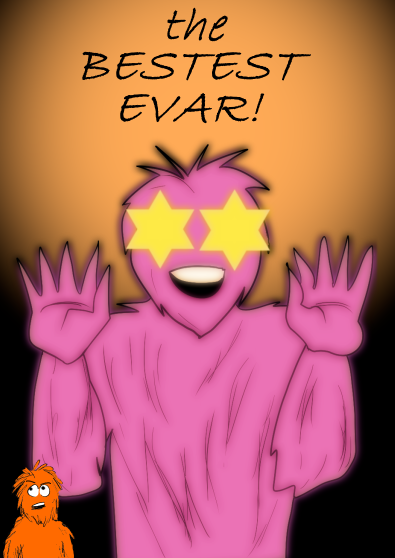 The Bestest Evar: Revisiting Mary Sues -
And a Contest!

Way back in the day our friend and my grizzled old mentor HippieVan did a post discussing Mary Sues - and we followed it up with a Mary Sue “contest”.

Many of us comic creator and reader types have probably known the term for a long time - it's gained more mainstream awareness in the past few years with some high profile characters who fit the bill very, very well.

Ah, these flawless, creator-loved beings are extraordinary! All the appeal of an athlete/movie star.
And so gifted with abilities that put everyone around them to shame!

Well…actually, having those abilities is not vital. Some Mary Sues/Marty Stus are useless lumps of less-than-mediocrity.

What matters is they're TREATED like these extraordinary beings, even if they aren't. Throngs of attractive suitors love and pursue them desperately. Canon characters (if the work is a fanfiction) are astounded by their wonderfulness.

There have been a few in every genre of fiction I'm sure, and a couple of really notorious ones in fandom - I'm not going to name them here, though we can talk about them in the comments below!

I think I first became aware of the phenomenon way back in the day of superhero comics' letters pages, where readers would complain about certain heroes being obvious favorites of the writer, with perfect powers and no flaws.

Many variations exist, and looking into them makes for interesting reading. The main thing that connects them is the eye-rolling they cause in the audience.

I would like to revisit the Mary Sue contest from a few years back, though!

It'll be a single page featuring a Mary Sue of your own creation - show off your Mary Sue in all their glory, with them doing something beyond wonderful. You can include text or dialogue as you wish.
Keep it to 800 px wide and I'll put all the submissions in this space either next week or the week after.

You can upload your pics to your image locker here on the Duck, or at another image hosting site, and PQ them to me, Banes.

Since these are Mary Sues, this is not really a contest, per se. They're ALL winners! Of everything!

Meanwhile, have you got a favorite/least favorite Mary Sue? Or is the term outdated? I don't hear it as much lately, but, well,
i felt like visiting it.

Have a good one, you perfect angel!

>> @dpat - I was thinking 500 would fit pretty well in the Newspost. They could be 1000 or 1500 px high if desired... << You could always create a comic, like the DD Awards, and post submitted pages there. Random thought, trying to be helpy!

@hushicho - Funny that you mention it, Hushicho. I've actually been watching some BFFT these last months. My favourite segments are the ones with you and Klebkatt, particularly the one you made on "My Immortal", which I believe, if my memory serves me right, was the first time I heard you bring up the subject about Mary Sues, talking about the "protagonist" of that fanfic^^

There actually is a path of development for a Mary Sue but takes a special storyteller to pull it off. The evolution of the perfect person into a real person, because their perfection was never real. Suddenly the empress Mary Sue has no clothes and gets a sharp kick in the teeth.

We discussed this on the program Bad Fanfiction Theater I appeared on many times. Mary Sues are fundamentally uninteresting, largely because there is nowhere for them to develop. They have no need of development, and even any setbacks or negative occurrences are trivial and, most always, so stereotypical that they just don't matter. When you have nowhere to go with a character, which most authors reliant on Mary Sues don't have the skill to develop, you have no story worth reading.

There is also the Anti-sue who is usually ugly, unlikable and can't do anything right. Again one can be almost as annoying as a Sue and is sometimes tasked with being a Sue's sidekick as if the two could ever be imagined tolerating each other in real life. LOL.

@bravo1102 - That's true. The opposite extreme can be just as frustrating. I'm trying to think of a character that would be a template for that kind of character the same way Mary Sue from that Star Trek fanfic is a template for the kind we are talking about. The name that immidiately comes to my mind is Max Payne. A character created for the sole purpose of being dragged through the muck, always brooding, constantly living on the edge, always being all angst, doom and gloom in every iteration he's in. He's a character that is practically born with a gun in his mouth is what I'm saying. I admit that I have a little bit of guilty pleasure thing for this kind of stereotype, especially Max Payne, but I can definitely see how that character who'd easily become overbearing and tiresome to people.

@bravo - yes! I haven't read it, but apparently the Mary Sue concept was identified based on a Star Trek fanfiction, where Ensign Mary Sue captured the admiration of Kirk, Spock and Bones, and was able to outshine and outperform all of them. If a downbeat or angsty character captures too much attention from most other characters in a story, that character is treading on Mary Sue territory!

I've read a few fan novels (even two that got published) where the main character is the author inserting themselves into the universe and solving all the problems and just being loved by the Canon characters. Of course there is the opposite where a character is so weighted down with angst, doubt and edgy darkness that they become overbearing and just kill a story. By the way it was Gary Stu, but by any other name a Mary Sue is a Mary Sue.

@ozoneocean - well said! What you wrote should have been this Newspost! I'd say Wesley Crusher in the early Next Gen seasons is a major one. A 'Creator's Pet' if ever there was one. A Mary Sue can also be a "self insert character" where the writer/creator is emotionally attached/identified with the character and allows their ego to 'protect' the character from anything interesting happening to them.

@Gunwallace - Ha! Truly, we do speak of her in hushed, reverent tones! I hope the moves she's making is working for y'all over there!

@ozoneocean - Agreed; I always thought the 'Mary Sue' title was gender-neutral. Yeah, I think Rey is the one who brought the term in to the mainstream consciousness in the past few years - and yeah, that kind of thing is almost never the actor's fault. I think some reporter even asked her about it and I don't think Daisy Ridley knew what they were even talking about. I was annoyed on her behalf - that's not the sort of thing to bother an actor about. It's in the writing. Or, in the case of, like, a Steven Segal, an actor who is controlling the writing.

It's hard to think of many others right now but a key feature of a Mary Sue is a mainstream property is that the creators need the character to succeed no matter what, for social, finical or promotional reasons, so they tend to smooth the way for the character too much, sing their praises too much, demand that nothing bad really happens to them and that other characters reinforce their greatness no matter what... Just generally undermining the rest of the story. So it's going to happen more with characters that people want to "protect" for whatever reason ("protect" in a negative sense, like mothering or being patriarchal). So female characters, child characters and ethnic characters will be more likely to suffer from this. But fan characters that people love too much could also be affected... for example I've seen Sherlock Holmes turned into something close to a Mary Sue

Jacinda Arden is a Mary Sue as far as the overseas media is concerned. And I'm just fine with that.

I think Captain Marvel in her Marvel film was probably close to a Mary Sue...? She had a pretty steady trajectory to ultimate power without too many (if any) downsides and she was always seen as special pretty much I think? I didn't mind the movie but it was a bit flat. Rei from the new Star Wars trilogy is an obvious candidate unfortunately, because Daisy acts her role well.

The term is as current as ever. Marty Stu needs to die though... Mary Sue is perfect for both genders. I used to think superman or Batman were Mary Sues, but they're not... millions of words of stories prove that: they're hated, loved, critisised, lose power, lose fights, are injured, die, get depressed, sidelined etc. Though they CAN be Mary Sues in specific stories, if the writing is bad.

Fun thoughts, 500 px wide is like a single panel width though.