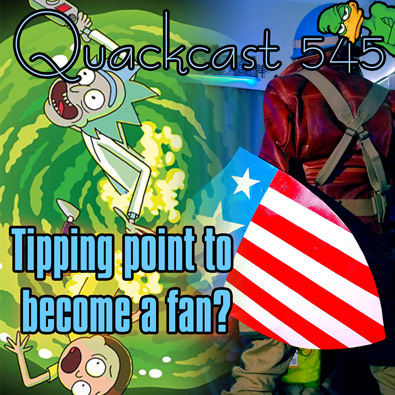 I think being a fan is about thinking deeper into the thing you enjoy, having it influence your life and creative choices, as well as making you want to enjoy it BEYOND what it is: making fan art, buying toys, posters, looking up trivia about it etc…
It can happen at any stage… when you first read the comic or see a promo pic for it or see a trailer for a TV show or movie or even just a cover picture. Or it can develop slowly over a lot of time and repeat viewings. But it's not a certain thing. I think most people are NOT fans of most things they consume, only certain things ever earn that honour.

Then there are things like being a fan of something but not liking the rest of the fandom, Rick and Morty is famous for that, with many fans being usually taken with the Rick character and wanting to be like him because he's an arsehole as well as a supergenius , and thinking they're also supergeniuses because they're arseholes. Admitting to being a fan of Rick and Morty can get you tarred with the same brush as those people, it can also scare people away of becoming a fan. Being a fan of something doesn't mean you like everything related to that thing, it just means that what you Do like, you really, really like.
There are different ways of being a fan too, my own fanship of Captain America is expressed in my cosplaying the WW2 movie version :)
What are you a fan off and when did that happen?


This week Gunwallace has given us a theme to Conscripted - What’s it like to have your body and soul transformed and subsumed into the body of a huge, magical, invincible, giant encased in unbreakable metal armour? You have no free will of your own, no ability to communicate or even think. You are now just a serene slave in the form of a huge golem with awesome powers commanded by another. Gunwallace’s theme for conscripted puts me in the mind of poor Darius from Conscripted who was forced into exactly this situation. This music is a serene, clean surface, a smooth forest pond. Calm and clear, disturbed only by the nearest drops of thought rippling across it and then vanishing. Slowly these increase, the rings crossing and converging, until the serenity is no more.

They're good aren't they? XD

I'm a fan of Comics😍

I think I may have recently become an MDK fan. Played the game recently for the ps1 and now I'm writing a knock-off story based on it.