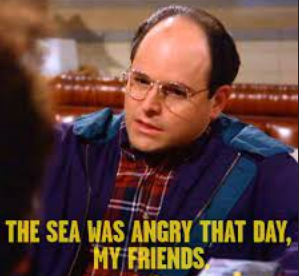 In the behind-the-scenes interviews about the show “Seinfeld”, Writer/Creator Larry David talks about the ending of an episode, I think it's “The Marine Biologist”.

To sum it up, the show is about fairly normal-yet-eccentric antics of the four characters, including George claiming to be a marine biologist to impress a woman. In the end, of course, the two are walking along the beach and of course, a crowd is gathered, screaming that a wounded whale is lying offshore and “is there a marine biologist here??” A classic, crazy Seinfeld moment.

What happens after, in the final scene is legendary in how long the audience's laughter went for when George tells his friends the story and makes the final revelation/surprise of the episode. It's so worth watching the episode…I won't spoil it.

Anyway, writer Larry David says that those final pieces are so outrageous and unrealistic that they could only work at the END of an episode. It's great for a huge laugh, but that moment would have no place at the beginning or middle of a show. There's just nowhere to go (in this sitcom genre at least).

It occurs to me, about endings, as we end another wild year, that the ending is the place to do these extraordinary things, depending upon genre… 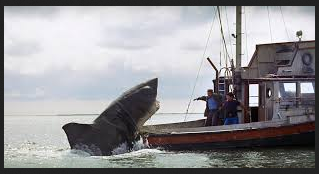 Because of technical problems, the shark in JAWS was seen very little until the third act. This became almost a ‘rule’ for horror and monster movies…keep it hidden as long as possible before pulling back the curtain at the end. That will give the ending far more power and intensity.

And at the very end, the climactic moment of JAWS, there was some debate on the set that a tank of oxygen would never blow up a shark the way it does in the movie. Apparently Spielberg (the director of course) said that it doesn't matter. THIS is what the audience wants to see at the end. If they've stayed with us this far, the logic won't matter at all. After everything they've seen, they'll be carried along by the emotion of it. It doesn't have to be realistic. 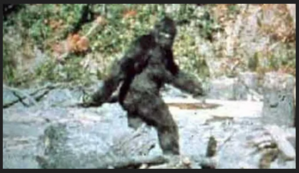 Agh! Not you again!
All right. One more appearance in honor of the New Year. Say your piece. The floor is yours. What do you want to express?

Anyway, those are some thoughts on endings. What do you think? Are there other things that work in the end that don't work elsewhere in a story? Does this only apply to stories about giant fish?


I hope this year's ending finds you all as well as possible.

All the best and Happy New Year,

And everyone knows it's a guy in a suit. Give it up. Bigfoot. Hah! Yeah, that film was a hoax. Big fat hoax. Not fooling anyone any more!

Sometimes an ending is the most outrageous set up of the movie. Who can forget the chase through modern day Hollywood of Blazing Saddles? The Planet of the Apes take off in Spaceballs? The impressive ending in History of the World part One? The police pulling up in Monty Python and the Holy Grail? Holy Grail was supposed to have an assault on the castle, but there was no money or real interest in filming it. So we got the hand over the lens. There were more than a few Looney Tunes where they throw away the fourth wall, like the film breaks or the Monster looks out at the audience and sees PEEEEEOPLE!!!

Happy new year to you! And agreed that sometimes, there are things that only work as a climax or resolution to the action. Most of the time, most writers are terrible at ending a story. And while a less-than-perfect ending can often be forgiven if the story before it is good enough, an especially bad ending can ruin any goodwill the previous story built up. Seinfeld is a perfect example of that.