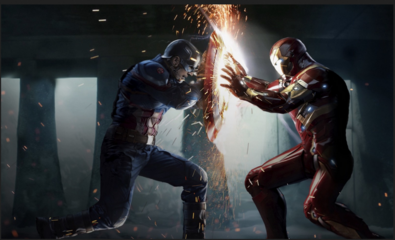 I've compared “Avengers Infinity War” to the classic movie cliffhanger in The Empire Strikes Back.

But the Marvel Cinematic Universe actually pulled off an almost-“Empire”-level story a couple years before that, in Captain America: Civil War.

The MCU started off with multiple movies setting up Iron Man, Captain America, and others.
Going from single-hero crowdpleasing blockbusters, the Avengers movie took it to the next level.

With Civil War, they raised the bar again. But not by raising the power levels of everyone and making the threats even bigger and more cosmic; they did it with a deep dive into character.

Everything gets turned on its head in Civil War. The Avengers take different sides and turn on each other. But what's powerful about it is how it's done. Tony Stark, the rebel, takes the side of the government who wants more authority over the team. Captain America, the patriotic military man, takes the other side.

Both characters have good, believable reasons to make the choices they do, that have been set up in previous movies in the series.

It gets intense, and pretty dark.

The plot is complicated, and the emotions are real, and heavy at times. But it's also a blast, with a couple of new characters showing up and making their mark in the hero vs. hero battle.

It hits the perfect balance in my opinion, between serious conflict and human emotion, and fun, colorful superhero spectacle.

To me it's the very best of the Marvel movies. I would even say that if the whole series of movies is framed as one big story, Civil War is the one, more than any other, that the entire franchise hinges on.

@ozoneocean - I'm always glad to see unity happening among people! And you and hushicho have found unity in your complete wrongness on this subject! IronHorseComics and I will be fighting you at the airport! ;D

@IronhorseComics - I've never read the comic. The movies are probably wise to take the bones or essence of those stories and change things up as they need.

@hushicho - Well obviously I don't agree at all - but I don't think we agree on much. S'all good! i won't go to war over it. But if I did, we'd keep it Civil!

@KAM - I can accept that. For me, the hero vs. hero stuff has been some of the most effective in the Marvel series. I think it's because I find the heroes of those movies the most well-realized characters. It's nice to see them go up against each other.

I felt the movie was really weird... It changed the characters in ways that didn't fit and was basically a weird holiday in the progression of the story towards Infinity War. It would have been ok if the civil war was the big end of the progression instead of Infinity war but it's not, it's just a diversion- which is a huge disservice.

The original comic this movie is based on was horrible and it only gets worse with age. The movie however was freaking outstanding.

It was a horrible debacle, both in the comics and, even more, on screen. It ruined characters beyond the point of any repair, and it cast people as heels who had no logical reason to do any of these things. Poor writing tends to alter characters to fit their story, rather than the better writing approach of adjusting a story so that it makes any sense for any of the characters. Superheroes fighting each other in such a petty way is revolting and nonsensical. Most of all, it's an insult to anyone who likes the characters...especially Tony Stark, who is the poster child for Marvel ruining whenever they need a heel. Completely irredeemable things are done in any version of the story, and on its face, it's ludicrous and interferes with any charitable suspension of disbelief.

I was never a big fan of hero vs. hero stories. There are times when they can work or feel natural, but basically it comes off like two kids in a sandbox screaming "My toy soldier can beat up your toy soldier!" The movie probably did as good a job as it was possible to do with that plot, but still it was not a plot I was invested in, or cared for, so it's not a movie I think very highly of, and will probably never rewatch.