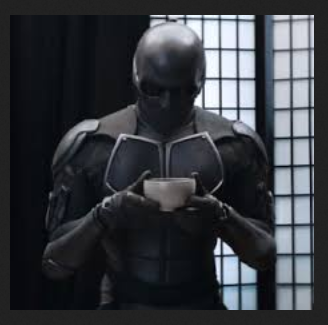 Fiction, certainly in the movie/TV/comics visual mediums, are full of characters whose identities are hidden by masks.

On The Mandalorian, the title character follows a strict creed that says he is not supposed to let another living being see his face, so he always wears a helmet (except for the few extreme situations that demand he take it off). We see him only once in season one, bloodied and bashed, and I think twice in season two as far as i remember.

His forebear, Boba Fett, was fully masked throughout his existence in the original Star Wars movies. Because he was capable, tracking down Han Solo and the Rebels, and had a cool costume and helmet, he became massively popular as a character. RiP to the original actor to play him, Jeremy Bulloch, who just recently passed away.

While there are other masked Mandalorian-types in the show, almost all of them take their helmets off regularly. they follow a different creed, and while it might possibly annoy the actor who plays Mando, I think he stands out and is iconic because of the helmet nearly always staying on. He's the exaggerated version of the ‘mysterious stranger’ archetype in old Westerns.

It's a powerful thing, a character whose face is never seen.

There is a reason why Snake Eyes, in the old GI Joe comics, cartoons and toys became the most popular character. And why slasher killers like Jason, Michael, and the killers in the Scream movies capture our imagination so powerfully.

The power of MYSTERY and the Unknown.

To have their true face obscured can make a character more iconically terrifying, or noble, or intriguing. We WANT to know what's hidden under that mask – or at least, we WANT to want to know, if you catch my meaning. We might not actually want to know - but we want that experience of being intrigued.

The Friday the 13th scenes where Jason takes off his mask are often my least favorite moments in those movies. The Scream films unmask only for the grand finales, where we learn, Scooby-Doo style, whodunnit and why. Snake Eyes and Doctor Doom have rarely, if ever, revealed their faces to us, and they're all the more powerful for it.

I have a quick shot of a full-face masked character in my comic, Chatterbox, and I'm looking forward to seeing if it's a successful character. I intend for the mask to stay on for the forseeable future of that character.

What do we love about the masked ones? Do you have a character like that?

Pretty much every such character will no doubt be revealed at some point. There's always some new writer or artist that comes in thinking THEY are the right person to finally reveal the visage beneath the mask...and it almost every time results in the downturn in the character's popularity. The closest I've seen to any character sticking to their guns in this regard is Judge Dredd, who has yet - in over forty years - to take off his officer's helmet. I think after a point, it's a mistake to ever have a character who's identity is so tied into this concept, go on to reveal their 'true face'. It very rarely satisfies anyone and unless there is some world-changing revelation to be uncovered in doing so, really, what could live up to the expectation? Ultimately, in light of a character taking the step of unveiling, we're almost always left with the inverse realisation of The Dark Knight Rises' Bane's thoughts on the subject:- No-one cares who you are, once you take off the mask.

The Goblin Slayer is so similar to Mando in character it's weird... he doesn't take his helmet off either. He has the same bad-ass aloofness, the unexpected caring side, the niavete about sex, and human relationships, the sens of honour, the one eye'd pursuit of his goals, the amazing tactical competence...

You don't see the faces of any of the other Mandos from the first season. Mano looks like Corey Feldman... it's a big let down XD

Characters you never see their Face: Phantom of the opera, “V”, Dr. Klaw, not really dangerous characters but all the adults from both Charlie Brown and the Muppet Babies, Charles from Charlie’s Angles, of course SnakeEyes, Destro, Cobra Commander, Dr. Victor Von Doom, Rorschach from Watchmen, BoBa Fett, Marvel’s Mysterio and WWE’s Ray Mysterio, too many to list. But I get what you mean. I don’t have any character like that. But if I had to choose which of my characters, it would be Voltfor. The Male SolarCell from my childhood is an all mask guy but I remember him not having a mask in the beginning before becoming a supervillain.

Not really the same, but I have a secondary character (who I hope to use more) who is always playing a "role." Quinn is nonbinary gender, a former thespian and master of disguise. I used the character once undercover as a female character whose job it was to distract Kaida. I have rudimentary scripts to use Quinn again as a male character gathering intel. I've shown Quinn's "true face" once (wig and make-up removed) just to establish the undercover identity.