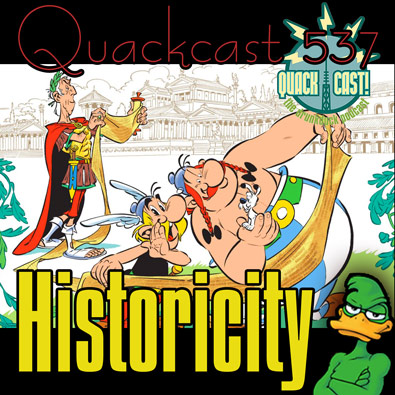 We have a chat about historicity in this Quackcast. What IS historicity? It's historical authenticity basically but a nicer way of saying it! It's pretty important for a lot of reasons to make the best effort you can with historical authenticity- it increases immersion of the audience, gives you a better understanding of the story and the world you're looking at (because things will make sense), and leads you to better understanding of your own history and where we came from.

BUT, that doesn't mean you always have to be strict. As long as you as a creator properly understand historical context then you've got a lot more leeway to play without creating something stupid. Playing fast and loose with history is ok as long as you know what you're doing, not just being a moron and faking it (hey, many of us are guilty of that). Historical fantasy, myth, classics, fiction, biography etc are all different classes of story where it's more or less forgiveable to mess around.

Asterix is a great example of a series made by creators who know their stuff. They've set it in a real historical period, used real historical figures and events. But it's fiction and silly comedy and because they know the subject so well they can screw with it, compress history, put Vikings in a time period hundreds of years before they existed, and tell modern satirical stories using a historical stetting. The musical Hamilton is another example of creators who know their subject intimately, so they re-frame the story of a US founding father with a cast of black Americans and create a work of intelligent social commentary that still has historical veracity.

Bad examples typically have an a-historical character who for no reasons at all has fully modern attitudes despite their historical setting- often typified by a lady character who chafes at her “constrictive” corset - this has become a cliché and now a meme for people who are bad at history.

An interesting example to me is the British horror series Penny Dreadful where they did an excellent job of creating a convincing historical setting and environment. They had characters with more “modern” ideas but they had very good reasons to have them in that setting, they had a more modern demographic to the cast and also made that fit perfectly as well: history is often “whitewashed”, especially 19th century London, but they worked around that beautifully and gave us a realistically diverse cast. And yet despite all the effort they'd done to make things fit and work across several seasons, they really undermined it by introducing a kick-arse kungfu-fighting lady doctor in lovely tailored suits in the final few episodes when they knew they were cancelled and couldn't finish the season. The character sort of trod on and peed all over the work the others had done to set themselves up and round themselves off.

Though, as I've said: historical fantasy, myth, classics, fiction, biography etc all have different amounts of leeway for what they are. In the case of Penny Dreadful it's a horror fantasy with a historical setting so it had a LOT of leeway. The trouble was that they set a solid precedent by creating their own style with excellent historicity, even though they didn't have to, which was why it hurt when they broke it. It was a betrayal of the other characters, especially Eva Green's character Vanessa Ives, a woman who struggled for her place in the world and built her strength from within, brick by brick, only to be shown up by an unimaginative standard trope Buffy the Vampire Slayer type character.

This wouldn't be complete of course without a mention of Blackadder: a brilliant historical comedy that knows its stuff enough to break it beautifully! What are your fave “historical” things to enjoy and what are your least fave?

This week Gunwallace has given us a theme to Chatterbox - Starting off down home, country bluegrass, playing the mouthorgan as you cruise around the back roads on your whumptruck… developing into a rollicking, rolling, joyous, fun roadhouse concert, complete with trumpets, piano, bass guitar, lead, old style electric organs, the whole deal! Get up and dance!

Honestly I think consistency is a lot more important than historical accuracy, because what we know about history changes regularly. If you present a consistent setting and have things consistently the same, then it only rarely prompts question by readers or viewers. It's especially difficult if you want to set something in a past period but want it to be about anyone but the most prevalent sociocultural groups. Sometimes, it's best to use the past as decor or accent, and merely make it consistently entertaining. Dark Shadows did this well -- they went for as much accuracy as they could benefit from, but not so much that it slowed down the story or interfered with its point.

Many thanks to Gunwallace for the music; it's spectacular!