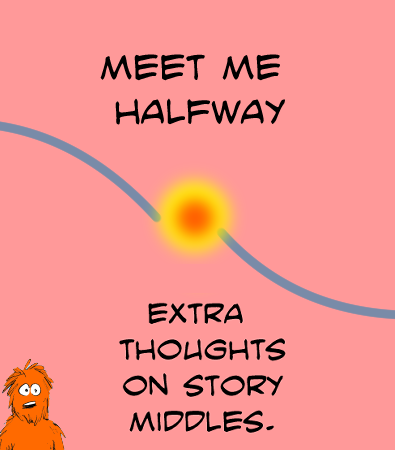 Last week I talked about what kind of stuff to stick in the middle section of stories.

Here's a tangent I found myself on, about the actual halfway mark:

Well, the middle bit almost always contains the actual halfway point of the story. In many stories this is a big moment that changes the course of the main character's life. Their story goal might change form. They might experience a big victory of some kind - not a complete victory of the story problem or fulfillment of their character arc - we still have lots of time left for that.

That halfway point, some say, is a good spot for the THEME to cross over with the literal story. It's why we'll often see the Protagonist kiss their love interest at this moment. I think I've mentioned before that apparently the old school screenwriters had the phrase “sex at sixty” to indicate this (the 60 page mark being the halfway point in a standard screenplay.

I notice in movies that the midpoint scene is a scene (or contains a scene) that feels different from the rest of the story. Kisses, sex, parties…in an action thrill ride of a story, it's a moment of quiet. In a small, quiet drama, it's a party. Quick, it's the Midpoint! Find someone to kiss!

I can sometimes recognize it in movies; usually it takes a couple viewings to know where it is (which is good; in a good story this structure stuff should be somewhat invisible to the audience. On the commentary to one of the last Avengers movies, the writers/directors have a humorous back and forth where they try to figure out where the midpoint is. It can get a bit murky even for the creators!

I think Shawshank Redemption's midpoint is where Andy broadcasts an opera record over the loudspeakers throughout the prison, giving the inmates of that bleak place an experience that lifts their spirits. Right after this is a scene where the main characters talk about hope, a big theme of the story, which will be important to have a a feel for to get the full emotional impact in the second half of the movie.

The midpoint of Thor: Ragnorok is the moment where the Hulk comes charging out into the arena to fight Thor.

The halfway point is an important, but often hard to recognize, part of a story.

Excellent post Banes! I sometimes enjoy story which you can tell the middle point, but also the ones that you are caught by surprise and when you realize, you're near the end of the story.

Writing what you basically understand to be the middle sections of a story is one thing, but explicitly trying to write a "halfway point" can be tricky in a long-form story where you may know "how" it is going to end, but might not necessarily know "when" you'll get there.

I like the change (I believe "The Reversal" is the proper name for this) to be built up to in the background so it still comes as a surprise (expressly to the main cast) but is not a WTF moment for readers/viewers. This is also the middle peak on the classical 3 peak plot chart. One method thing that can lead to this, which I like in cases where subtlety is needed, is for the background sub-plots to trigger things. By not being part of the main plot, most people don't make the connection, yet when it does occur it makes them remember that the story elements are still linked together. For example, in a romance (Not my cup of tea), the male lead may be a wastral and gambler. After being beaten to a a pulp by people he owes money to he may sort his head out and be willing to be serious in life.