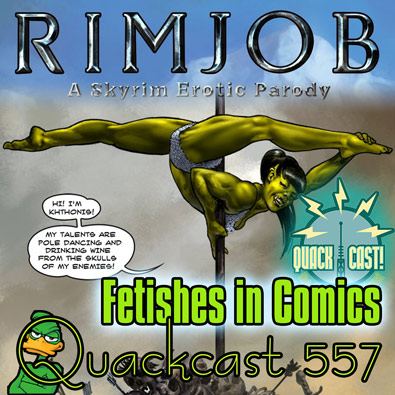 Fallopiancrusader joined us as a very special guest to chat about fetishes in comics! It's really interesting and he brings his expertise with adult comics and his wide ranging knowledge of comics in general to bear on the subject. So what are fetishes? Well they're often things that people have sort of a sexual interest in but aren't always associated with sex themselves, they're peripheral to sex. Because of that they're often enjoyed and appreciated in their own right for their own sake! Think of things like body piercings, tight laced corsets, wearing fursuits, spanking, wearing S&M leather and PVC gear, shoe appreciation etc. all things associated with sex that people can also enjoy and appreciate outside of sex.

Comics have a long and surprising history of being associated with fetishism. One obvious thing is that superheroes wear skin-tight outfits that leave little to the imagination, they also often find themselves in perilous situations where they're tied up and gagged (or at least they USED to in the old days), and there are obviously people for who dressing up as superheroes IS a fetish (not cosplayers), but that's not really what we're talking about here so much, apart from two big exceptions: The mainstays of DC Comics Wonder Woman and Superman. Both have an association with fetishism.

Joe Shuster, cocreator of Superman, made money drawing comics where characters would be whipped, tied up and “tortured” in titillating ways. The creator of Wonder Woman was into bondage, which is the reason Wonder Woman has a magic lasso and why she always used to find herself tied up with it. He practiced bondage in his private life with his wife and her female partner. There are also people like Wally Wood who was a great comic artist, commonly credited with Power Girl's impressive bust, his sex comics are extensive and very well drawn!

Something very insightful that FallopianCrusader bought up was that there are various fetishes that can ONLY really be explored through the medium of comics! Things like giantism, miniature people, vore (where characters eat a lot), expansion, furies, Robot sex, horror body modification, giant boobs, huge genitals, Tentacles and more. In fact one of the most popular runaway hit comics on DD (NOT a sex comic) explored both expansion and vore fetishes at the same time, it was called “Craving Control”. In it a woman would be insatiably drawn to consume vast quantities of food and as a consequence her body would expand, her stomach and already big boobs would grow. But very soon she would magically shrink down again back to her old conventionally sexy proportions. People LOVED it, it had massively wide appeal outside of those fetish interests because it was funny and well drawn but it was only created because of fetishes and the fetishes in that from can't really exist in reality.

This is a safe for work Quackcast and does not go into sexy details, so don't worry in that regard.

This week Gunwallace has given us the theme to Creepy and beautiful synth scene-setting that creates space and volume and then fills it with a meat grinding steamroller of death that slashes and crushes all in its path like a huge armoured monster!

That's a great offer, thanks for that Hushicho :D We'll have to take you up on that at some stage. @Jason Moon hahaha,that gives me the idea to ask about fetishes in the forums.

I'm very glad you've discussed fetish and kink. If you'd ever like to discuss specifically gay stuff and gay comics, I'd love to chat with you sometime! You always keep encouraging free creativity and expression, and that's always admirable from where I am.

Little punk rock girls who shave half there head! Tinkerbell with a mohawk <3