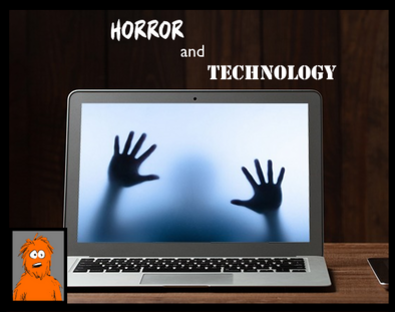 I remember when cell phones began to get popular and pervasive. As a fan of horror movies, I said to myself “well, that's the end of a lot of horror stories!”

With cell phones, it doesn't matter if you're stuck at camp or in a creepy house across town - you have a phone! You can just call the cops! Or your friends or parents to come and pick you up!

(between you and me, I may have not said these things, or even thought them to any real extent. But let's just pretend, okay?)

In the classic “When A Stranger Calls”, the shocking twist of where the calls are coming from is not a shocking twist at all! And more than that, the caller's name shows up when they call you, so a lot of creepiness and mystery is taken out of it.

For a while I believed (or so I am going to claim) that it would be awkward to find ways to make cell phones not work for some reason in every horror story to prevent an easy out/lifeline for the characters.
Unless there was some supernatural force at work to block the calls (which could work, but couldn't be used in EVERYTHING), then the isolation and danger inherent in horror would be lost.

It's interesting to know that as of Scream (an early horror movie that used cell phones), storytelling has evolved to be scary in our always-changing technological world.

That world has changed a LOT since Scream, as well - but it's no less horrific in the right context.

The fact that we put so much of our lives out there for anyone to see, and the ease with which sinister types can fake their identities and stay anonymous means there is no shortage of horror stories (true and fictional) that can be told in the new modern age!

And so it will continue, horror stories evolving and mutating forever and ever.

I don't know anything!

With everyday technology like cellphones it's easy to forget that you're holding in your hands a sophisticated and powerful tool straight out of science fiction. (I haven't found out how to install the phaser beam app yet, but I'm working on it.) A powerful tool in a creepy psycho's hands is a sure recipe for trouble, so it had to happen. If it hadn't been Scream some other movie would have picked up the idea.

Strictly speaking of cell phones, I haven't read it yet (but it's on my to-read shelf) but Stephen King's "Cell" uses cell phones as a device to introduce the horror. Just conjecture, since I haven't read it yet, but the premise seems to be similar to Ring, in which technology is the means by which a mutation is triggered by/transmitted to a human.

Got to watch some of the Old Dark House from the classic days of horror. Electric lights, there's always a power outage due to a storm or car accident, then the phone lines go down. So what are cell phones but another technological toy for the powers of nature to take away? A moment to acknowledge that for some reason all the batteries are dead, or no coverage or the warranty expired and now the technological crutches are gone how well will they fare?

The Matrix is kind of a horror story in a sense, where everyone is grown to be nothing more but batteries inside an existential machine and the world we know of is nothing but an artificial dream under the machine's control. What much use is calling for help via a cellphone when the very world you are in is out to get you.

I have no Mouth and I must Scream.

I always hated Scream, plus the attempt at using tech in it was laughable. I really think that having smart phones in horror is generally a bad thing, and it usually leads to clunky writing trying to acknowledge that they exist. Cameras are much the same. It's shitty. You can't set atmosphere as easily, if you want to try and make it "super real". I think what some of the others have said is true, and it's usually best if you treat phones like they do smoking up or having sex -- it's going to distract you and make you easier to pick off. But for goodness sake, don't have your horror revolve around people having cell phones. They won't use them intelligently, even in a realistic setting!

The French TV series Black Spot/Zone Blanche just sets the entire show in a region with really bad cell coverage. Modern cop shows set in cities have a very similar problem with CCTV cameras everywhere. The plots always have to explain why this particular crime/perpetrator was somehow not caught on camera at any point. Although I can see Covid mask wearing could come in handy there.

I would like to add I wonder if writers of the past lament the birth of light bulbs and telegrams? Feeling that instant light and distant communications robbed them of "true horror"?

The sad fact of reality, police response tends to be slow and that's if the dispatch doesn't write you off as a crank. And that's if you are going for "realistic slasher" horror, add in the supernatural good luck getting anyone to help you. As Lovecraft once said, and I'm paraphrasing here, "To think that horror only happens alone, in the dark and in distant castles of yore and not in bright, crowded streets is foolish at best."

Ring (movie) and the trilogy of books (and other short stories/novellas) by Koji Suzuki that inspired the movie are some of my faves. The movie (Japanese version is much better than the American remake, IMO) is awesome, and the book series is a lot of fun in its transitions from horror (Ring) to medical thriller (Spiral) to sci-fi (Loop). Perhaps the most bombastic technology as horror out there is Stephen King's "Maximum Overdrive." Not saying it's good--just the most bombastic. (And it gave us AC/DC's song "Who Made Who.") The short story it's based on, "Trucks," is a lot more low key.

I think that I got my first cell around 2002 and slightly later I watched an horror about cellphones: https://en.wikipedia.org/wiki/Phone_(film)

The summer camp or the house can be in a cell phone dead zone. On the other hand considering how many people stare at their phones ignoring everything around them, that just makes it easier for the killer. ;-)