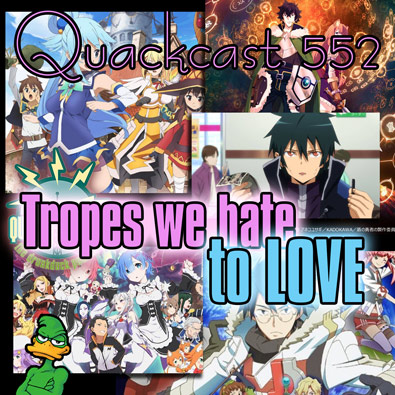 Last time we covered tropes we hated! This time we're talking about clichés we actually like. It's quite a bit trickier because clichés are clichés for a reason (overuse) so it's not easy to like them, except in some cases…
For me it's Isekai. That's a Japanese word for “another world”. This is a very old genre, it's basically a story where a person from our normal world goes to a magical world, we see this in ancient fairy stories, Wizard of Oz, Alice in Wonderland, the Lion the Witch and the Wardrobe and many others. until the mid 20th century it was the default way of writing any fantasy story. It has always been around, the Japanese were just the first to come up with a popular name for it.

In the last few years this genre has exploded in Anime and Manga, with stories based on the idea of a person being physically transported to the world of a MMORPG (Massively Multiplayer Role playing Game). Early on we had anime like Hack.Slash, which was pretty crap but no one else was really making that sort of story then. Now with the popularity of Sword Art Online (again, not a very good version of this trope), lots of other stories in this vein popped up, so much so that the trope has become a cliché. This means that there are a lot of good things made using it but a LOT of badly made trash as well and that people will get sick of it, as they do with clichés, meaning we will stop seeing anymore Isekai stories for a good long while.
I still love them though!

Pit and Banes like Slasher horror. This genre became such a tired cliché that it almost died out but was revived by the movies “Scream” and “I know what you did last Summer” which helped light the fire for this phoenix to be reborn. Retro is another big thing in horror now that's starting to become a cliché, the popularity of Stranger Things helped fuel that monster. The massive popularity of the Marvel Universe franchise has resulted in a huge over-population of superhero films and they're becoming a cliché people dislike, many still love them though.

What are some clichés that YOU love?

This week Gunwallace has given us a theme to Amber Mage - Warm waves of amber light synth. Subtle tribal beat flowing under a beautiful orchestration of violins, blending with sharp, bouncy electronica pulses, creating a tasty melange with a sweet spicy cinnamon flavour

"Lone Wolf" characters are just awesome - you know those gruff, gritty, taciturn badass gunslingers riding through the desolation of a spaghetti Western for no good reason except their own (whatever that may be) and shooting everyone in sight who clearly had it coming. (Note that there is no clear dividing line between good and evil; it's more like "mad, bad and dangerous to know" vs. "even worse, because they're plain a-holes".) This kind of story typically has only a very loose connection to realism and an even looser connection to the concept of stories having any plot to speak of, but I can't help loving it. It's not restricted to Spaghetti Westerns either, but works in pretty much every genre you can think of.

@Kou- I just rewatched that not long ago and now I'm watching the second season and the exta bits. It's so good!

Reincarnated as a Slime is kinda fun, dude spends more time actually focusing on building his nation up and logistics than he does combat.

@Wildcat Arren. I like those too, especially The Phantom. @Andreas- love that too :D

Noir style inner monolouge. Can't get enough of that trope^^

I always liked single hero hiding his identity behind a mask. Someone like Zorro, Shadow or Batman - somebody who does the right thing because somebody has to, but is only a human and has to hide who he really is to protect himself and people close to him. I have a feeling that we don't get this type of heroes now.

@Hou the Mad There are quite a few now that hove mixed it up- there are a few evil demon and overlord ones as well haha! But they vary in Quality. There are a few that take an older character in their 30s or 40s and put them in a new world, female as well as male. I liked Overlord initially but I felt it went wony in the later seasons... in that he sort of didn't know what he was doing and wasn't even actually being an evil overlord and then in the later seasons they corrected too much and made him TOO evil XD

@Furwerk, those are good examples of the genre

Despite the constant use of High School character getting yeeted to another world and getting super powers (Seriously writers, do it a LITTLE different.), I actually love the idea of Isekais, and the premise has near-infinite potential. It just needs people thinking outside the box (Like Overlord, where the Main Character is a Villain Protagonist.).

Sorry, but it is something I just enjoy. It has a lot of ties to a lot of movies like Goonies, Explorers, Pagemaster and basically the entire library of 80's/90's kid films. To be honest I noticed outside of anime, "kid hero" is kind of drying up in favor of older teens or adults in their twenties maybe due to the teen dystopia, like for every Kipo or Gravity falls there is like a dozen Sonic The Hedgehog/Detective Pikachu set up of popular property being paired with an adult, even Infinity Train, which started with a kid hero, had two seasons focused on adult characters.

Really? Ugh, kid heroes are usually pretty awful to me hahaha! Unless there's a really good contextual reason for them.

Kid heroes is, and will always, be my favorite thing. Power of friendship. Isekai makes me smile. The use of supernatural in horror is an automatic win my book.