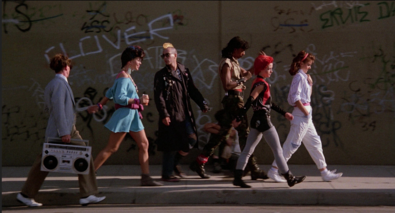 There are a handful of cinematic “group shots” that showcase an ensemble of characters in a memorable way.

The Avengers in their first movie have one where they're finally all together, back to back in a circle to face the invading alien army.

There's the Usual Suspects in the police lineup, which is the very striking poster for the film.

When we watched Return of the Living Dead for the last Quackcast, I was reminded of a couple great frames that have stayed with me for many years since I first watched that awesome movie. The big one, and what inspired this post, was the introduction to “the punks”.

It's a shot of the punk characters walking down the sidewalk, while the camera pans along with them. There's such lively energy to the scene, and the teens go back and forth with the rapid dialogue that marks this movie. Love it.

The other horror group shot that came to mind was the iconic “campfire” scene from Friday the 13th Part 2 (another one of my horror faves). It's a simple single shot of a large cast of camp counselors sitting around a campfire while the head counselor tells his staff the “legend” of Jason Voorhees and his demented mother. 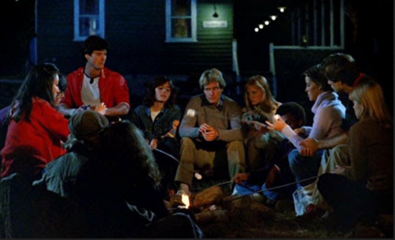 The camera is either still or very slowly pushing in. This shot is reused in future sequels and homaged in the Friday the 13th remake.

So simple and so effective!

The group shot is probably not optimal for character development, or the emotional climax of a story. Where I think it shines is creating a strong vibe, a mood, and a tone for a movie.

The punks' scene in Return of the Living Dead is lively, edgy and pretty rapid-fire. That's what that movie feels like. The campfire scene in Friday 2 is creepy, and creates the anticipation for the horrors to come, and tells us the point of the movie very effectively.

The two priests over Reagan's bed in The Exorcist, in a single still shot, and the trio of shark hunters in Jaws in the boat - these scenes set a tone and imprint a strong visual that stays with the viewer in a powerful way. Granted, the content of both those scenes is a vital factor too.

The group shot is not a horror movie pillar on the level of the final girl or the creepy gas station attendant. In fact only these two examples came to my mind. But they're extremely memorable and effective images to me.

Something that's a very natural fit for comics of course, with our covers and splash pages and such.

So ends my final Newspost for this October season!

Happy Halloween and all the best, 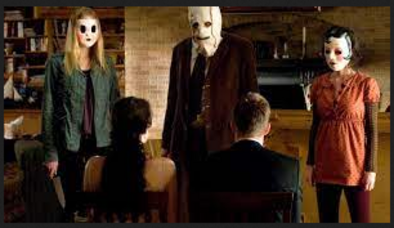 The main image should have been The Avengers circling shot

I've never seen return of the living dead surprisingly and after hearing that it is 80's themed with PUNKS I'm going to have to watch it now. I'm an 80's child with a mohawk

Damn, the main image for this one should've been the Addams Family. Thought of it too late!