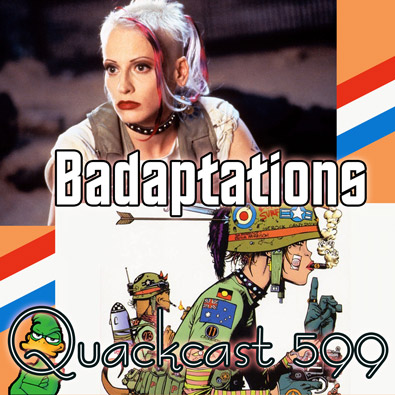 Source material is something that we can love and respect, but it's just as often disregarded, degenerated, and denigrated, especially these days where it seems like everything you see is an adaptation or even an adaptation OF an adaptation or worse. I think it's important to go back to the sources so you can see what was truly great about the original to begin with. It can help you see what was lost in the adaptations and to discover new and important meanings and ideas that you never would have guessed at.

This Quackcast topic was inspired by a video by the Youtube based culture critic Georg Rockall-Schmidt and his video titled “Nevermind The Source Material”.

I'm sure there have been a lot of times for all of us when we've consumed an adaptation of one of our favourite books and we've thought it was lacking. But have you ever done the reverse? Have you seen an adaptation and then hunted out the source material to see what all the fuss was about, to see where it all started? I've done that quite a few times myself and it's usually pretty rewarding. I really loved the film version of Tank Girl, it was anarchic and captured a certain alternative 90's zeitgeist. The original comic series though is a very different beast! The movie has a lot of heart and pathos, but the comic is far more cynical, nihilistic and sardonic with a much harder edge. They both have the same sort of style, but the point of view and sense of humour of the creators is largely absent from the film.

Many of us know Jane Austen's Pride and Prejudice from the film and TV versions, especially starring Colin Firth. Mr Darcy in those versions is seen as the prototypical sexy, rich, tall dark and handsome man that women lust over, who Elizabeth Bennet eventually wins… It's seen as a great romantic story with a strong heroine. What's lost from the source material is the fact that it's a romantic comedy over the top of a satire on British mating rituals of the country gentry. Rather than an aloof, desirable bachelor, Mr Darcy is actually a pathetic, shy man who hides his acquired social anxiety behind a mask of snobbery, although he's good at heart. And all throughout, Elizabeth's real goal is not to win a man and a big country estate, rather it's to survive and retain her place and pride among her piers.

The Adams Family is a much adapted piece of work. There was the TV series, a cartoon series, a TV movie, the 90s movies, and now a Netflix series, but what was the source material? You'd think it was Charles Adams' comics from the New Yorker, but that's not actually fully true. The Adams Family was actually created for the 1960s TV series starting John Astin, Charles Adams worked with the creators to develop the characters. His comic was simply a bunch of single panel jokes with unnamed reoccurring characters, it wasn't till the show that they acquired structure, names, personalities and a world to exist in. Most people today have no idea that the 90's movies that are seen as so definitive are simply short summary parodies of the 60s TV series. The latest Netflix version is basically a pale copy of a pale copy. It would take far too long to explain what has been lost in the translation- I am sure the Netflix series will be good in its own right but we should never let later adaptations overshadow usurp superior source material.

Have you ever gone back to uncover the source material for something and been pleasantly surprised? Or maybe even disappointed?

This week Gunwallace has given us a theme to Mega Maiden and the Chop Chop Princess - Heavy, deep bass synth thunder dueling with percussion and synth guitar in a fierce fight for dominance, which turns into a dance battle to the death with the bass synth landing the final, decisive blow!

@Scarf- Yup, The original Adams Family is really the 60's series because of that. It's amazing how bare bones the cartoons were. In the context of its time compared to other contemporary early 60s sitcoms the Addam's family was WAYYY ahead of its time.

@TheJagged. I LOVE TG and own it in all sorts of formats. The movie is cool. I still listen to the soundtrack haha! Loved Lori Petty as TG.

@Jason. I'm just watching that now. It seems pretty good apart from the Sandman's younger face and lack of cool Gaiman hair haha! Also the ethnicity of the characters, although it fits with the social structure of today's world, it's completely anachronistic and makes things seem a little silly... It's like "no... Britain was way too racist and classiest for it to be that way back then" It would have been cleverer for them to show the contrast of class and race relations from the 1920s to the 2020s as things change. Though it looks great all over.

I used to assume the Addams family started life as a comic strip, so it was fascinating to discover those original cartoons, with characters who were never named. All the more amazing that their popularity inspired the original TV show, which was wonderful. No surprise at all in that being adapted for movies, which did bring in something new with the Wednesday character. I'm looking forward to seeing what Tim Burton does with her in the upcoming series, but had no idea there was an Addams Family show on there already.

The Tank Girl movie's a legit guilty treasure of grrrlpowrrrr. (And i'm not just saying that cause i have a mega girlcrush on the protagonist... and the MC of my current comic was DEFINITELY not heavily based on Lori Petty. Nope, not at all. Incidentally, think imma go watch Tank Girl again.)

The new Sandman show on netflix does an incredible job of copying the comic. I find myself pausing the show sometimes on shots that are identical to the imagery of the comic. The only changes they really made in the show was changing a few characters from white people to black people and adding in some gay characters. The first 4 episodes are my favorite, episode #4 was wonderful. "I'm a universe." "I'm anti-life."