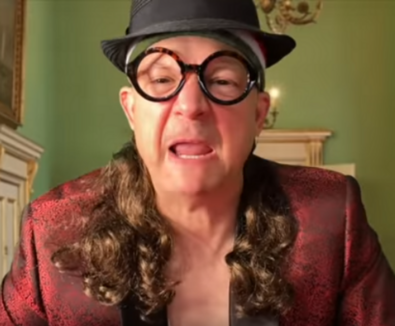 Critics, professional or not, identified a trend in many of the…lesser regarded manga and anime series.
It's the “everyman hero”.

This school of thought is that to make a lead character who is identifiable to everyone in the readership or audience. So the lead will be unremarkable, and as blank as possible as a personality, with no real interests beyond the most broad.

The character becomes an empty canvas that anyone can imprint themselves onto and put themselves into his place. Or that's the theory at least.

…and the Protagonist becomes the least interesting character in the story, and the writer watches helplessly as the fanbase embraces the side characters, love interest, mentor and villains, and lose all interest in the Protagonist.

This happened to Mickey Mouse. Walt Disney famously banned many sorts of conflicts, mistakes, and “edgy” situations and character flaws from infecting his beloved Mickey. As a result, other characters got much more interesting stories and became more popular.

Of course, there is a way to make a Protagonist relatable without killing everything interesting about them -

Give them a want and need…a heart's greatest desire and a wound to heal from or growing up to do in some way.
Give them strengths that others see in themselves or WANT to see in themselves.
And a flaw or wound…an itch to scratch that we can understand and that we can be interested in watching
develop and challenge the character.

Even if we don't share the specific recipe of wants and needs, and strengths and flaws, we will be able to relate if these elements are primal/universal…in GENERAL. The specifics may not be, and they don't need to be.

Do you have a particular character that annoyed you for being this bland ‘everyperson’ archetype?
Who are your favorite “everyperson” Protagonists?

What annoys me with generic corporate everymen is how they tend to be mouthpieces for misplaced realism. Why bother writing a story if every fantastic element is mercilessly denigrated? Just stick with documentaries or something. There are plenty of people irl who are allergic to anything outside their human-centric routine, but adapting that to fiction doesn't mesh well with... the whole premise of a fictional world. Cliche dialogue like "oh a superhero just saved me, he still sucks because he's a freak of nature, it's all his fault anyway" isn't relatable, it only identifies whoever said it as an ungrateful jerk. I'm a much bigger fan of everymen characters who exist as a wacky group's anchor, they often show up in manga. It's funnier when they try to understand weirdness, rather than cancel it.

Charlie from the Tim Burton's film adaptation of Charlie and the Chocolate Factory I thought was a pretty bland and forgettable everyman hero protagonist. There's nothing that stands out about him at all. He's just a good boy who says all the good things a good boy should and then vanish into the background as soon as the other kid characters along with Willy Wonka himself shows up.

Nobody does "everyman" stories like Frank Capra did. The Hollywood movies done during the Depression really captured the normal guy. But the thing is everyman is special. There is something about him that comes through.

Tenchi from the Tenchi Muyo series of films and TV was one of the most memorably dull characters I can recall, but there are countless others, including Batman, most of the time. I'd also argue that just because someone is fairly mainstream and ho-hum, that doesn't make them sane so much as it makes them much more boring than everyone around them. I feel like, if I want to see a story about someone unexceptional, I'll just look at the world around me. I'd always much rather watch something where everyone has something interesting going on, like the original run of Twin Peaks, for example -- there, even the most down-to-earth seeming characters have some distinctive trait about them. At the very least, though, it's usually okay as long as everyone else is interesting. It's insufferable when all the characters are nauseatingly "normal" and nothing happens beyond barely-exaggerated real life.

Early childhood gripe: Belle from Beauty & the Beast. Always thought she was way too perfect and just sorta bland. I can't tell you anything about Belle other than she likes books. Compare that to Arielle who i identified way more with. Who by no means has only positive personality traits, she can come off as quite selfish in fact but that's the point. People ain't perfect. You learn to love them in spite of their flaws.

@KAM - that's a good point. It can definitely work. Michael on Arrested Development is another case of the one sane man in a world of eccentrics. I loved Boston Legal when it contrasted the "normals" with the couple of eccentric main characters. Later is seemed to be all about the eccentrics and I didn't like it nearly as much.

I remember an interview with a producer for the Andy Griffith Show & the first season wasn't working right and talking to a producer of the Jack Benny Show he pointed out that AGS only had eccentric characters and they needed a normal person to ground the eccentrics. Andy was made more normal and the show became a success. I like to think of this concept as a solar system. The normal person is the central "star" (pun intended) and the eccentric characters orbit around them.