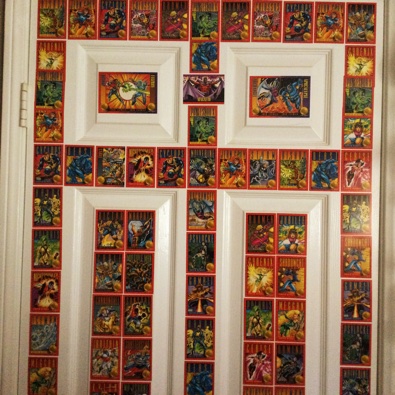 An unopened, cellophane wrapped pack of trading cards is a sleeve of anticipation. The probability of finding a hologram or a rare character card is reason enough to get excited.

Around the time the Uncanny X-Men cartoon gained popularity in nineteen-ninety three, SkyBox Released the X-Men Series II Trading Card Collection. The art featured was drawn by well-known artists of the time: Alan Davis, Brandon Petersen, Andy Kubert, Joe Quesada and Greg Capullo. The illustration style was a departure from the Series I deck of trading cards drawn by Jim Lee.

The only card in my possession in ‘93 was a Jean Grey card. The card was bent in three places with heavy folded lines creased across the card stock. It was a gift, handed to me by another card collector who had an extra Jean Grey card. I cherished that card regardless of its well-loved, secondhand condition because it helped me make friends.

Earlier this year, I hoped to find the same Series II cards that were sold in comic shops nearly thirty years ago. Fortunately, the “one man’s trash is another man’s treasure” rhetoric still rings true, and one-by-one, I organized each card in a neat pattern over my door.

The art for each character looked exactly how I remembered. I still get a thrill from reading the character backstory and biography on the back of each card. The bright jewel-tones, neon colors, and red borders were very reminiscent of the early nineties.

I love the Uncanny X-Men (Team Blue/Team Gold) because they were always the most relatable group of Marvel super heroes that I always wanted to emulate.

I used to collect the cards myself at the time, I'd save up until I could buy a box and then just open all the packs at once. I usually was able to put together at least one full series and a few especially rare cards sometimes. It was fun! I always liked collectible cards.

Had every issue of Ironman from #2 through the early eighties. Left them in a laundry room in the barracks at Fort Meade. Big regrets on doing that.

That's a lot of cards! This stuff was everywhere in 90s comics, I wonder how many people lost them or threw them away... I have a Sauron card :D (the human-shaped pteranodon, not the LotR villain) but I think it's from a different series.

That's a work of art. The arrangement is excellent.