How Ya Gonna Pay For That? 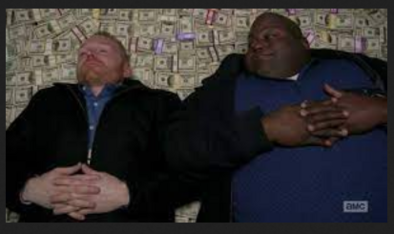 The dream of money has to show up in fiction, at least to some degree - it's a very human driver/motivator.


Last week i talked about characters who are motivated by money. Here are some more thoughts on money and some of the different ways it's handled in different fictions.

Way back when, it was often brought up in articles how massively expensive the lifestyles of the characters on sitcoms like Friends would be in reality. The status of some of the characters (coffeeshop server, unemployed actor, unemployed chef…) would never be able to support the size of apartment and general lifestyle depicted on the show in New York. Ditto on Sex and the City with Carrie and her extravagant shoe-buying, cosmo-gulpin' lifestyle.

On those shows, there would be ONE storyline (on SatC) or a few storylines (Friends) that had to do with money, and the divide it could cause between the friends, or a similar story about Carrie borrowing money from one of her friends. Nice to see that aspect of life looked at for an episode - but those shows were not really about that, so the money issue would never be referenced again after the specific episode.

I mentioned in my last money-Newspost that I liked how the pursuit of money was not ignored as a motivator for the criminal characters in Better Call Saul. I may have mentioned the Apprenticeship of Duddy Kravitz, one of my favorite books some years ago, where the character is driven by acquiring money to buy land to achieve status and worthiness.

Other shows feature casts of characters who are ridiculously wealthy and money is never an issue - or casts of characters who have certain personalities because of their insular wealthy lifestyles, and are then struggling when the money goes away for whatever reason (Arrested Development and, I believe Schitt's Creek are about that).

So there are some money thoughts, anyway!

Money is just a resource for your needs or wishes. So you should feel them same imo. But for a story its can be good point to start some line of a character. Same as in real life

In the end, money is only a medium of exchange, and worth only what people say it is worth (well, to an extent except for currency commodities where an actual commodity is used as a currency, such as certain amounts of rice in feudal Japan) One thing I liked about Buffy and was used a bit latter in Angel was the main groups were sometimes shown looting the vampire and monster lairs of their kills. Slayers being supported by the council has them make sense as well. Some shows like in Supernatural explain things away so the main characters don't have to bother about work (ie long running credit card fraud) Me, I like the loot your enemies approach. It also gives a plot hook for when the MCs are caught with stuff from a murder victim. Hmm, we never are shown Loki or Thor being supported by their worshipers . . . LOL

The most interesting thing about this "money talks"-thing is that the very same mechanisms work just as well with other currencies than money, even if not everyone realises it. It's one of the reasons why "really existing socialism" never really existed - couldn't, if you ask me, because if money is taken largely out of the game, people will automatically drift to some other form of capitalism based on a different currency. In this case, the currency was power within or through the party. You could earn it e.g. by compliance, anticipatory obedience, denunciation and intrigue (everything that gets you approval in a dictatorship) and you spent it by helping yourself and your family to a more comfortable lifestyle, small pieces of relative freedom even, a slightly better position than your neighbour, or you could swap benefits for favours and vice versa --- Another thought: not every obsession with money may be a lust for power in a different guise, really, but most of them certainly are.

I'll second Corruption on these two categories, and I've met both in real life. The first group does sometimes forget their initial goals, or after having achieved them finds they can't stop any more and rationalize it with "a need to improve". With the money for its own sake group I'd always ask what made them that way in the first place. The easy way here is of course just staging them as villains - God knows some of them are - but when you focus on their human traits instead, things get really interesting. For example, they may need to reassure themselves that they have finally escaped the poverty in which they had grown up, they may consider making money a kind of sport and use it as a way of keeping score, they may have found that finances are the only thing they're any good at, unfair treatment in the past may have given them a bitter, cynical outlook etc..

I think that characters motivated by cash for their actions can be divided into 2 main groups. One is the people who want the money to use it. It could be to secure their family's future (Walter White's original motivation) to have fun, repay a debt, show off how great they are and more. The second group are after the money for the sake of having the money. Sometimes the first group gets focused on the "get money" part and their original motivation is lost. Of course, it would be amusing if the person had good motivations for getting a lot of money, but everyone else thought they were being greedy and tried to stop them, even costing them money, only to realize at the end they were bad guys (Main Character to the new landlord they just destroyed: "Why were you so focused on getting money? You jacked the rents up 50%!" Landlord: "Because the old landlord was stealing the money for repairs and I needed the cash to fix the place before it's condemned! Congrats, you'll be homeless soon.")