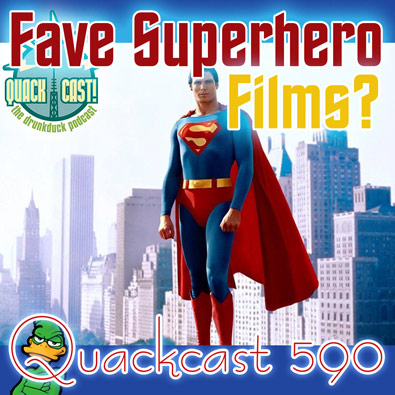 I wanted to do an easy and fun one this week and just chat about our fave superhero movies, starting with our firsts! For me and Banes it was Superman with Christopher Reeve. It's a real classic, full of positivity, hope, and optimism, all with bright colours and classic iconic imagery… In that way it's a bit like many of the Marvel films and the more popular DC offerings like Aquaman and WonderWoman, but without the overbuilt and over-defined muscles!

Reeve was handsome in an almost alien sort of way and quite well built but his muscles weren't pumped up to the extreme like they are on pretty much every single modern superhero movie character, which is quite interesting when you think about it. His suit was very simple- no crazy little irrelevant textures that are there for no clear reason, no finicky details and effects, it was just bold and flat like in the original comics. Starkly iconic!

The superhero films that do better always seem to be the ones that are completely unapologetic and unironic in their portrayals. They don't try to make their heroes “realistic”, they don't deconstruct them, layer on drama, get rid of the over the top costumes, tone down colours or superhero abilities. Superhero films that aren't ashamed to be superhero films tend to succeed. You could say that the other side of the coin is when things are taken too far as in Batman and Robin, but that was an obvious self parody rather than a film in love with the idea of superheros.

One of my own personal faves is Captain America: First Avenger, because it shows the true superhero origins in the real historical context as well as actually showing that superhero doing his day to day missions after getting his powers (fighting the Nazis and Hydra). Too many of the films just give as an origin story and then a climax, they never ever actually show us what the hero “does”: They ONLY show a simple progression from birth of the hero to challenge hero faces to hero overcoming challenge. The fact that it gives us a proper historical context can't be overstated - It means you get to see the world in which the very idea of the modern superhero was actually created, the world that gave birth to these superheros is actually on show!

This week Gunwallace has given us a theme to Space Pack - A gentle dancy progression, leading into more and more urgency and danger. Very Scifi and slightly spooky, with a little explosion at the very end… But is it really the end?

@Gunwallace Well he WAS the "Man of Steel" ;)

@SpaceKrispies The Incredibles is great! The sequel wasn't as good because of the focus on the kids... Pixar has this issue where they HAVE to make kids the focus of stuff these days because they need the story to be about coming of age for some reason. But the first one was perfect. Capes definitely are not that dangerous though haha!

@marcorossi the Batman 1966 film was fun but a total campy self parody haha! I preferred the series. That's interesting about "They Call me Jeeng"! In English speaking countries we often associate other country's superhero films with the bad ones made in the 70s and 80s, it's hard to update our thinking. On a side note, I don't think there's ever been a serious attempt at a good Australian made superhero film. Though I'm probably wrong, I'm pretty out of touch.

@marcorossi Trieste was nice. Enjoyed the couple of days I was there on business. Certainly, can see why it would be a great place for a movie.

@Slingy : send me a PQ with your email address and I'll send you an mp3

Reeve's Superman had "no crazy little irrelevant textures that are there for no clear reason" ... According to Micheal Palin in his first volume of diaries Margot Kidder told him at the time that Reeves had a large metal object in his costume to create the impression Superman was also super in the trouser snake department. She got annoyed that it always seemed to be poking into her when Reeves was behind her, so she started flicking it with her fingernails which gave off a metallic ringing sound she claimed was audible in the movie.

Thank you so much to Gunwallace for the absolutely awesome Space Pack theme! I love it!! I can definitely picture the series to it while listening. I would love to be able to save it! Great stuff! :D

Also Batman 1966, though perhaps not the kind of movie we are speaking here. Some years ago some italian filmmakers tried to enter the superhero genre, so we have The Invisible Boy (that I personally liked but some friend of mine didn't). This also had a sequel I think though I didn't watch it. It is a sort of italian/balcanic version of the X-man in terms of logic (it's set in Trieste, on the border between Italy and Slovenia) but the lead character is a kid. Also "They call me Jeeg" is cool, it has a really simple plot but it had a lot of success in Italy because it localized the superhero genre a lot, but it also has a lot of grittiness without being stupid so it is cool (it came out more or lesso contemporarely with Deadpool in Italy and while both movies are quite violent, Deadpool is splatter whereas They call me Jeeg is more down to earth violence so it is more striking).

Superman the movie is by far the best super hero flick. It was true to the comics and the character. That's why The Man of Steel was not a big hit. Hit wasn't as genuine (still liked it). Many good super movies these days. When I was growing up George Reeves and Adam west were on top, despite being in reruns. Captain Marvel (not Mar-vel) was good in the Shazam Isis power hour. Still unsuccessfully trying to freeze frame her when she is running around flying and jumping (but that's a topic for an adult post). Then came tv's Hulk & Spiderman & Captain America (we enjoyed them at the time) and the straight to video Captain America movie (which is much better that it get's credit for. Only thing I hated was when they made the Red Skull Italian).

I guess The Incredibles counts as my actual favorite superhero movie, as it is my second favorite movie of all time. (The Ghostbusters don't technically count as "superheroes", do they? If so, then, the original 1984 GB is actually my very favorite movie, so they get my vote.) If I am forced to go 'traditional/mainstream/Big Two', then Avengers (2012 - Jeez, has it really been a decade?!) counts as my favorite superhero movie.

The first superhero movie I saw at all was "Batman" '89 on VHS, the first comic film I saw in theaters was technically the first TMNT movie, and then "Batman Returns" came soon after. I remember I didn't even know that the Reeve's films existed until many years later when I caught the end of "Superman 3" on TV and was like: "What is THIS!? I didn't even know this was an option!" And I'll never forget going to my local Blockbuster to try and find the Superman films, looking around the same "Action" section that the Batman films were in, and finding nothing. Then when I asked someone who worked there they told me: "oh, those films are in the Science Fiction section." which blew my mind in the sense of "OF COURSE they are!" As far as "favorites" go: "The Dark Knight" is the best movie to feature a superhero in it, but "Captain America: Winter Solider" is the best superhero movie.

For me, faves would be Superman: The Movie, Batman Returns, Spider-Man 2 (the Raimi movie), The Incredibles, The Dark Knight, Man of Steel, and Wonder Woman. I will say that Avengers: Endgame had an incredible payoff and probably the greatest battle that will ever be put on screen. That said, I'm one of the few who love the Zack Snyder trilogy (as long as you go with the director's cuts); it's a proper portrayal of superheroes as mythological figures (and underscores a general difference between DC and Marvel--DC sees heroes as gods of myth, and Marvel sees them as more human). Yes, the Snyder movies can be dense and a bit emotionally distant compared with the enjoyable Marvel movies, but there's a lot of emotion if you unpack them and a majesty to it all that I really enjoy.

@Dpat57 that might be true of superman as a rationalisation but there are other heroes who don't need big, well defined muscles but get them anyway XD Though I think that's more down to modern tastes and conventions than anything- defined "cut" muscles weren't a fashion in the 1940s, it was seen as a bit gross, only skinny people had that sort of figure because it's easier for them to get a low fat density. Even the original hulk didn't have the modern extreme level of muscle definition. But when extreme definition came into fashion in the the body building scene in the 1980s that changed the look in comics too.

@Marcorossi They updated ironman to the 2000s but I don't think he was deconstructed and all his costumes were versions of stuff from the comics, even the original ugly MkI suit, so they stuck with him as he was supposed to be, they didn't alter him for the audience.

Superman's muscles were Kryptonian so they didn't need to be super-defined, they were naturally more dense and powerful than human muscles. He could have grown up a skinny weed and he'd still have been able to throw bulked-up villains through walls. But that would have been another movie!

"They don't try to make their heroes “realistic”, they don't deconstruct them, layer on drama, get rid of the over the top costumes, tone down colours or superhero abilities." I think the first Iron Man movie (that started the boom of marvel movies) was very good because it managed to do both at the same time.