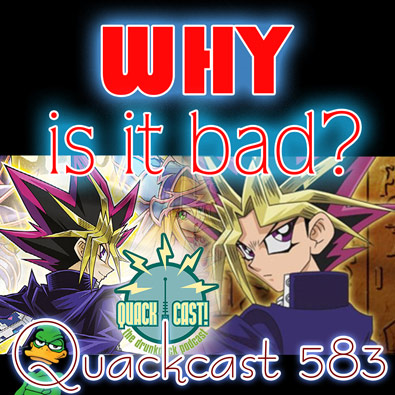 Spoiler- we don't actually talk much about Yu-Gi-Oh! But I feel it's a good example of a pretty bad story- a so-bad-it's-good story, but bad nevertheless. The idea we're talking about here is that it's useful to look at bad stories and stick with them because they can really help you write better. They're a lot more useful than good stories because you'd rather just enjoy those and it's a bit harder to examine them for technical details, but with “bad” stories the faults stand out strongly. Instead of simply dismissing a bad story or making fun of it, it's more useful and valuable to try and “fix” it: try and work out why it seems bad and think about what would be needed to make it better, then think about how that applies to your own work. Maybe you're actually making many of the same mistakes?

Yu-Gi-Oh! is a little too much work to use as an example, but something like the Marvel movie Eternals is good because it only had a few flaws. Big ones, but also very good parts as well:

- Lots of telling rather than showing. A text dump at the beginning was just the start of that. It wasn't stylistic choice like in Star Wars, but rather something we need to understand what is happening. All through the film characters tell us about things rather than the story properly depicting them.

- Revealing the solution to mysteries too early and so it undercuts built up tension. Mysteries are really interesting and intriguing to the audience, even when they think they've solved them, it still feels very rewarding to have them revealed nearer to the end of the story. Revealing them far too early feels like you're being cheated and wastes a valuable resource. Eternals does this twice with very significant mysteries about halfway through.

- Having generic, cannon-fodder bad guys. This is true of many action stories especially from Marvel films, but it's particularly bad here. Saying any more would be a spoiler. But this is something that Yu-Gi-Oh! does far better.

- Leaving out information that would better make sense of story elements. We have the character Icarus refereed to frequently as “the Pilot” by another character who's never met him before, but we have no idea why. A deleted scene reveals why, but without that it makes no sense, you're just left to feel it's a pointless joke about the Icarus myth, which it's not.

Despite all this and more there are many good points to this story and it would be possible to fix it through re-editing. I found it more rewarding and interesting to work out what exactly made this not such a good film and it helped to better highlight the good parts for me. It also helps me see what to avoid in my own writing and what I'm doing wrong. Try it yourself? Maybe you can tackle Yu-Gi-Oh! and let us know how that could be fixed?
I'm not brave enough.


This week Gunwallace has given us a theme to - Malefic Demonic Apocalypse - A creepy red garden filled with writhing demonic monstrosities and horror! This electronic piece grinds and roars, sounding like an acidic, burning harpsichord spewing fury and vitriol in a crimson torrent.

Our movie critique thread does this somewhat - https://www.theduckwebcomics.com/forum/topic/177412/?page=36

I would say that Yu-Gi-Oh is more of a prisoner of its source material and the anime is by necessity a very cheaply produced product for a cliche, tropes and short cuts 😅 while the Marvel movies made much more of an effort to adapt the source into something with more general appeal, and were notably successful in that- not because the source material of one is essentially better than the other but because of the difference in raw resources devoted to each.

I would argue that really, the Marvel films are much worse than Yu-Gi-Oh can manage. At the very least, Yu-Gi-Oh is true to its source and was mostly made to continue to appeal to fans and readers who had allowed it to be adapted into various other forms. It's not truly great writing, but it is immensely successful at what it sets out to do, and without really betraying the spirit of what it's supposed to be and supposed to represent.

Thanks to Gunwallace for the Malefic theme. Gave me John Carpenter vibes. perfect.

Hit the nail on the head with the saw movies. The first was pretty good even though made for shock value, but the sequels completely fell into the shock and gore cycle and were completely nonsensical around it.