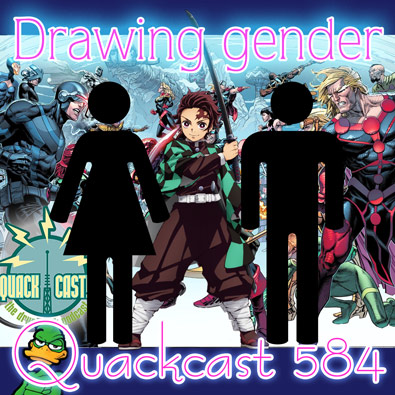 LISTEN on our player
Listen on Stitcher ​​- https://www.stitcher.com/podcast/drunkduck-quackcast
Or TuneinRadio - https://tunein.com/podcasts/Books–Literature/Drunkduck-Quackcast-p1150194/

We start off with the idea of talking about art techniques, tips and tricks we've mastered and could help people with but the cast turned into a discussion about drawing male and female characters- also trans, androgynous, etc. There's an art to representing gender in imagery! It's super important to remember that the way we see gender in art is mainly culture based rather than an innate biological reaction and the perception of gender in art is different according to your cultural background. It's basically a visual language that everyone learns, but as an artist you have to learn to actually “speak” it, and that's not as straight forward as you think.

A rough example of of how culture based our perception of gender in imagery is:

- In most Western art the “male” is the default. We take for granted that a figure is male in art unless it's augmented in some way, the most basic version is the stick figure. These are men. To make a female stick figure you add long hair, a dress or boobs. Some or all of that, it doesn't matter. And this scales up to other representations. A natural, more realistic depiction of a female person won't always read as a woman in art unless they are “feminised” in some way, i.e. a prominent bust, removing angles and lines and adding soft, rounded features, featured lips, larger eyes, thin waste, wide hips, long legs, large thighs, styled hair, thin neck, large head. And doing any of that to a male figure is a way to “feminise” them or blend their gender.

-In comic art from places like Japan and Korea it's the opposite somewhat, especially manga. The female form there is more of the default. Male characters involve a lot more augmentation to create a “masculine” effect, sometimes bordering on caricature, as can happen with female characters in Western art. A generic male manga character would typically read as more “feminine” if dumped straight into a western context.

In times past the focus was more on primary (genitals), or secondary (beards, boobs etc), sexual characteristics, i.e the Venus of Willendorf (a very female form) and male figures with disproportionately sized penises. While early Egyptian sculpture is pretty androgynous in his regard, male and female are not well differentiated, the main focus is on the build - eg. men having slightly broader chests. Early Greek sculpture even more so with simple abstract forms representing “humans”. Much later on this changed into a more separated, codified style: men being heavy, muscular, bearded, women being soft and slim, with youth of both sexes being more androgynous. Interestingly genitals were very diminished in this art, penises were small and flaccid, while vaginas were never depicted.
Though it was a different story with the art intended for more secular, “common” consumption, which could show pornographic scenes (mainly 2D). Art featuring Satyrs or Priapus massively exaggerated the genitals for deliberate comedic effect. For them focus on genitals didn't indicate masculinity or femininity so much as comedy, stupidity, shame, or porn. 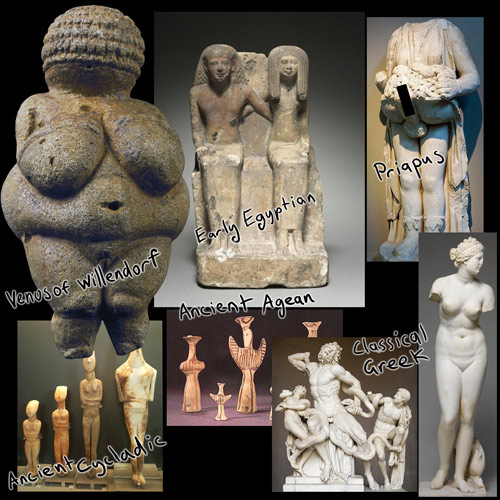 Basically gender in art isn't about genitals or genetics, it's all culture based and you need to learn the visual language of your audience to make yourself understood by them, as well as to confuse them or subvert their expectations!
What trouble have you had when depicting gender? I always run into issues myself. I make my women too angular and my men are too slim.

This week Gunwallace has given us a theme to Gyor - Charged up, magnetically accelerating into clean, sweeping, panoramic electronic tones, momentarily overrun by a furious chaotic electric discharge, only to return to serenity once more.

Small genitals on male ancient Greek statues were meant to symbolise restraint and thus virtue. So as an example of how much this topic is about cultural perceptions rather than biology you could hardly choose a better one.

The dancer Eisa Jocson epitomises the gender subversion of movement and guesture in her performance for Peaches' "How you like my cut" video (https://www.youtube.com/watch?v=jhYF2qeMyRA) where she performs a "macho dancer" style routine, typically performed by gay men in the Philippines as an exotic dance to show off their masculine traits, it sends a very different message when performed by a woman. Rather than sensuality it conveys strength, power, confidence and boldness.

@Marcorossi Ah yes, body language is another thing entirely! And it's also another thing that can be subverted and mixed around when you swap it and subvert expectations. A great example of that was the character Taskmaster in the movie Black Widow: The widows have very graceful, closed, ballet-like moments expected of women while Taskmaster has very rough, open, masculine type moments that you don't expect from a woman.

Another important part of picturing gender is that women are supposed to move "gracefully", that usually means with their knees very close, whereas men usually have a more straightforward posture; ulttra-macho men in manga usually sit with their legs wide open (this is a traditional thing: if you look at pictures of ancient daimiyos, they sat on the battlefield with legs wide open to show off power). While it is true that there are difference in the ways males and females move, generally in comics both eaqstern and western the "feminine" gestures are very exaggerated relative to reality.