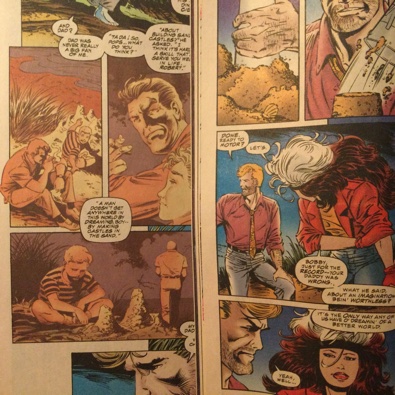 Saturday morning was spent mall trotting like a typical nineties mall rat. The mall was like a ghost town in the early hours of the day when every storefront was closed. I window shopped every floor, twice.

The comic book shoppe was the only store to hold my curiosity and I wandered through it like a museum, making my way to the rows and rows of plastic wrapped Silver and Golden Age comic books packed tightly into cardboard boxes. I thumbed through the entire section of X-Men comics before finding the familiar art style of the Uncanny X-Men (circa Stan Lee era) that I grew up reading. Issue number 319 caught my eye because of its cover featuring Psylocke and Archangel wrapped in a strong embrace—a pairing that has curiously slipped under my radar.

A B-Side story plot in the comic focused on the budding friendship between Bobby Drake (Iceman) and Rogue. Bobby shares a memory about building sand castles on a beach as a child while his father dismissed his efforts.

Here is the flashback:
Bobby Drake: “Ta da! So Pops…What do you think?”
Dad: “About building sand castles?” he asked. “I think it’s hardly a skill that’ll serve you well in life, Robert. A man doesn’t get anywhere in this world by dreaming, boy—by making castles in the sand.”

Midway through the comic, a conflict erupts in the present day between Bobby Drake and his father. Rogue and Bobby return to the shore and have a talk:

Bobby: “My whole life, I’ve tried to accept everyone for who they are. Even before I got my powers, y’know—before I learned I was different…I was always the guy who made friends with the new kid in class. Third grade? I beat up the class bully because he was picking on the smaller kids. Want to hear the funny part? Ever since I was a kid, I thought I learned all that from my parents. From my Dad.”
Rogue: “And now…?”
Bobby: “Now I have no idea where I learned it all.”
Rogue: “Bobby, just for the record—your Daddy was wrong. What he said, about an imagination bein’ worthless? It’s the only way any of us have o’ dreamin’ of a better world.”

The overarching message: Imagination is necessary in order to dream of a better future.

I keep returning to these two conversations as a former sand castle builder and part-time daydreamer. No matter how good the present seems, it can always be “better”—and how beautiful the possibilities of “better” can be once realising the ceiling is infinite.

Today, on this Labor Day 2022, take a minute to really listen to Rogue’s words of advice to Iceman and use your imagination to dream of a better world—and if possible, visit a seashore and build some sand castles.

Uplifting stuff. Dreaming of a better world is all we have to keep us warm this winter in the UK.