Tension and Release and appreciation for Watcher 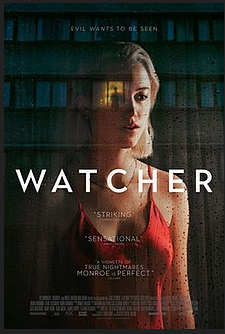 Watcher (2022) is a fairly unknown new movie, I think, and I recommend it. Simple, well-made, and scary.

Might as well get an early start on the October celebration, here - the fall is my favorite season, for so many reasons, including the time to celebrate our love for the scary!

I have a special love for the ‘slow burn’ horror - when it's done well. I think that a storyteller who knows what they're doing holds our attention even when there are no blood n' guts or masked ghouls howling in our faces.

It's in the timing of how events unfold - not too fast – slow. But not too slow. In film it also includes compelling and appropriate acting, music and editing. And writing of course - which would have something to do with a question we want answered and a character we want to take this slow-moving journey with.

Recently I saw a movie called Watcher (2022) and loved it very much. The filmmaking is stellar, and it had me on the edge of my seat. Without spoiling too much - and this movie is best enjoyed without knowing the ending, of course - it's about an American couple living in Romania, for the guy's job. The lady speaks almost none of the language, and is there with pretty much nothing to do. She begins to believe she's being watched - stalked - by someone.

The storyline is right up my alley - I love this kind of thing. And it turned out to be so well-made, with several tension-filled scenes that had me glued to the screen.

I must admit that I watched it a second time and it didn't have quite the same power, knowing the ending, but it was so well made that I enjoyed it quite a bit even knowing what happens. And I think I'll watch it a third time; I really like this kind of story.

The tension and dread is so thick and it's such a blast when things ramp up in the end.

I recommend it, anyway! On Amazon Prime.

Anyway, I thought I'd mention some of my other favorite movies that are mostly tension and less release -

HOUSE OF THE DEVIL
By the director Ti West, this one is so creepy and full of tension and dread that during the main character's slow exploration of a big, dark house, with pretty much nothing happening, I know someone who jumped up and said “I can't! I can't watch this anymore! I have to get out of here!” That's what these slow burn stories are all about! Desperate for cash, a young woman is hired as a babysitter in a secluded mansion and gets much more than she bargained for.

THE INNKEEPERS
Another film by the same director in a slow-burn style. Unfortunately, it's got an ending that doesn't quite work for me. But when I first saw it, it REALLY scared me. It's also got a couple of great lead characters/actors. It's about the last night of business for an allegedly haunted hotel that's about to close, and the two clerks who are working there.

SILENCE OF THE LAMBS
This one is much better known of course. It's a standout horror movie across the board, and won multiple Oscars (very unusual for horror/thriller movies). A-plus writing, directing and acting, and I'll never forget the ending where an unexpected escape happens (unexpected for me anyway!). Also, the final confrontation with the Villain was a blast – especially after all the rich character development, mystery, and psychological tension leading up to it.

THE VVITCH
I haven't seen many period-piece horror movies that I really liked. This one I liked. Pretty authentic to the time period as far as I know, with the interesting characters and isolated context that helps all the slow burn horrors on my list. An unusual one, but quite well done!


So - I love a slow burn horror when it's done well. How about you? Any favorites in this subgenre?


Stay tuned for more horror and Halloween-themed stuff throughout October!

@plymayer - I haven't seen Innkeepers or House of the Devil in a few years and not sure where those DVDs are, so thanks!

@marcorossi - I'll look for those, thanks - The House With the Laughing Windows is an intriguing title!

Thanks for the tip! The Watcher doesn't appear to be available on Amazon Prime in the UK yet, but I see House Of The Devil is free to watch. Might save that one up for Halloween.

Found The Innkeepers, House of the Devil and The VVitch for free on tubitv.com. Those three are also on freevee.

Will give some of these a look. Always searching for a good horror flick.