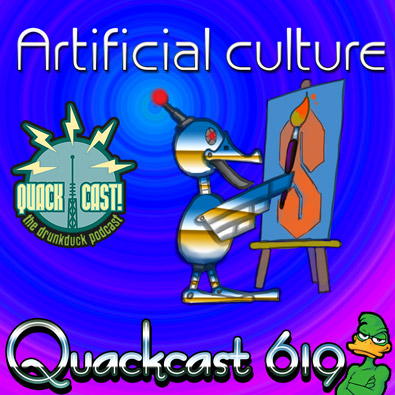 Talking about AI again but this time our subject is different: Does it have a negative influence on culture?
AI creative tools in the hands of an actual skilled creator opens up amazing possibilities. Real creative people will be able to use them as the tools they are, to mix and match with their own knowledge, talents and many different creative sources to produce novel and interesting things!

Culture is invigorated by people making novel things, but the way these creative AIs are designed they produce essentially only derivative content. This can be tempered by the human factor of the person using it, especially if they come to it with a lot of background skill and if they don't intend to simply “stop” with the AI produced art but rather intend to use it as part of a larger process. However, because this technology mostly attracts non-creative people most AI produced creative work is not creative (be it writing, video, music, games, or visual art). The commercial pressure to produce the cheapest and quickest products will mean that creative people are largely pushed out of creative jobs and replaced with non-skilled, non-creative people using AI tools, which will have a degrading effect on culture produced in the commercial industry.

That can have a negative impact on culture as a whole, especially as younger people grow up with it as the norm, not knowing anything else.


This week Gunwallace has given us the theme to Meatware - Grinding, red, churning, twisting, growling, processing, heavy, liquid, viscous, thick, fibrous, chunky, fatty, sinewy… a heavy electronic sound that gets you deep in your bones.

@the Jagged- I think you're overlooking something here, and it's pretty common to do this when looking at things from more of an aerial perspective, Bravo does it constantly: the overall world doesn't end but the world does end for individual people all the time. When you zoom out far enough all the dips and valleys smooth out into a flat surface and there are no issues, the trouble is that the world IS actually made up of those tiny individual components and their worries and struggles are real, It might not affect the overall world too much if some change happens, but it can be life or death to thousands of individuals, or just detrimental to millions.

The Jagged: Ahh, yes, let's just not think and not be creative and just be as basic as possible, even though all of us here are ARTISTS. Your last sentence is a real parallel to the phrase, "Good soldiers follow orders" from the Star Wars franchise. Hey look guys, TheJagged is trying to get rid of creative jobs that have the capacity of a really good payroll. Fuck doing what you love doing, especially if you're getting paid for it. We should all be dishwashers or, hell, we should sit ourselves in a 4 by 4 cubicle in a boring, grey, mundane, 2000's-esque business office doing... business shit.

Tired of looking at AI-generated art? How about listening to an AI-generated K-pop girl-band instead! https://www.bbc.com/news/world-asia-63827838?fbclid=IwAR1sK5VpJbkQhU0HsFtHBYJaNVPl-Gz04ZXVA8C5sXktwcNIdrDKmioRjNg

Even on the commercial site, there are already websites (pixabay, freepik etc) that give out photograph and drawings for free, and even commercial ones like Adobe Stock in reality are way cheaper than hiring an artist or even a photographer. So I'm not sure it will make that much a difference commercially, in many cases the "jobs" already disappeared. I might be wrong of course, but I think this AI thing is overhyped, because we live in a society where we expect everything new to be "the new great big thing".

It depends if by art we mean "self expression stuff" (the romantic concept of art) or "decorative stuff" (what art is mostly used for commercially). I think that the "romantic" concept of art is a bit idealized but not completely wrong: we expect art to elicit emotion and these emotions are elicited because we believe there is another thinking person behind it that is sending us a message. This is the reason when some style becomes too famous and commercial it becomes boring: it is because readers/consumers can't believe anymore that there is someone who is expressing something behind. So even for decorative purposes, while AI art may look cool at some point people will perceive it as "AI art" and it will lose in value (as long as people recognize it as AI art).

I feel like this just another case of "this is the end of civilization as we know it" scare. Children already grow up on generic crap. Still doesn't stop them from drawing crayon art just for fun. Creativity won't go extinct. Jobs that require creativity might, to which i will counter yet again: so what? How may other jobs require any sort of free thought? If anything your boss is probably happy if you don't use that brain of yours too much. Be a good cog in the machine, worker #73.

@Hushico- you'd be wicked how much creativity goes into creative jobs at a lot of different levels. With the way things are going it might be that no matter how you Cross-Skill people will choose some basic generic AI crap made by an amateur because it's cheaper not to employ a creative at all at any level. I predict a lot of jobs will just be fully eliminated.

I disagree with both of you completely 😅 For a start the pretty pictures that stuff produces as a simple end product (with no extra work done on it by an artist) are just banal. It's a very close equivalent of a lot of the digital art that came from deviant artists themselves that were simply after likes: utterly generic, meaningless digital fantasy art, and that's no coincidence because it was probably trained on that 🤣 I find that stuff offensively boring, whether made by a person or machine and it's the main reason I don't use Deviant art anymore. -I quit long before that AI stuff, it was the human version of that which had already turned me off. I prefer hanky stuff with meaning and thought behind it to pretty stuff that fits with a fashion or popular style.

My Deviant Art recommends are getting flooded with AI art. And seeing the ever better looking fake art right next to the terrible amateur doodles of real artists... i mean, there's all the reason you need. Most art sucks. Heck, i'd rather look at some nice Midjourney sceneries than another awful Undertale fan comic. Art takes years of refinement, work and a not insignificant amount of innate talent till it's anywhere a professional level. And once it reaches that level, it becomes unaffordable to anyone but big corp. Some soundcloud weekend rapper can buy AI cover art for 50$ a piece (or do it himself literllay for free), and to the untrained eye it's gonna look as good as any vintage vinyl cover. Profit! Actually the root of the whole issue, isn't it. People don't care about the *art* side of art. Not on the level that artists do, because we were the ones wo suffered for it. To anyone else it's just a pretty picture to look at. "Why waste time pay lot money when few money do trick."

Interesting, but I think that prediction is rather wild, especially considering so many jobs in the creative industries aren't very creative to begin with. Most people who use anything are not going to be, by and large, especially creative people. It's why so few people comparatively ever produce anything they're proud enough to release, and fewer than that ever promote and receive notice for what they do. Most of the AI tools, which are more accurately called machine learning, can be of immense help to genuinely creative people, and especially serve to equalise the field more between huge studios and corporations, and independent creators. The jobs most in danger of replacement would be best advised just to learn the tools like many corporate artists have to learn the company's chosen production software, which is the why their field has most always worked.