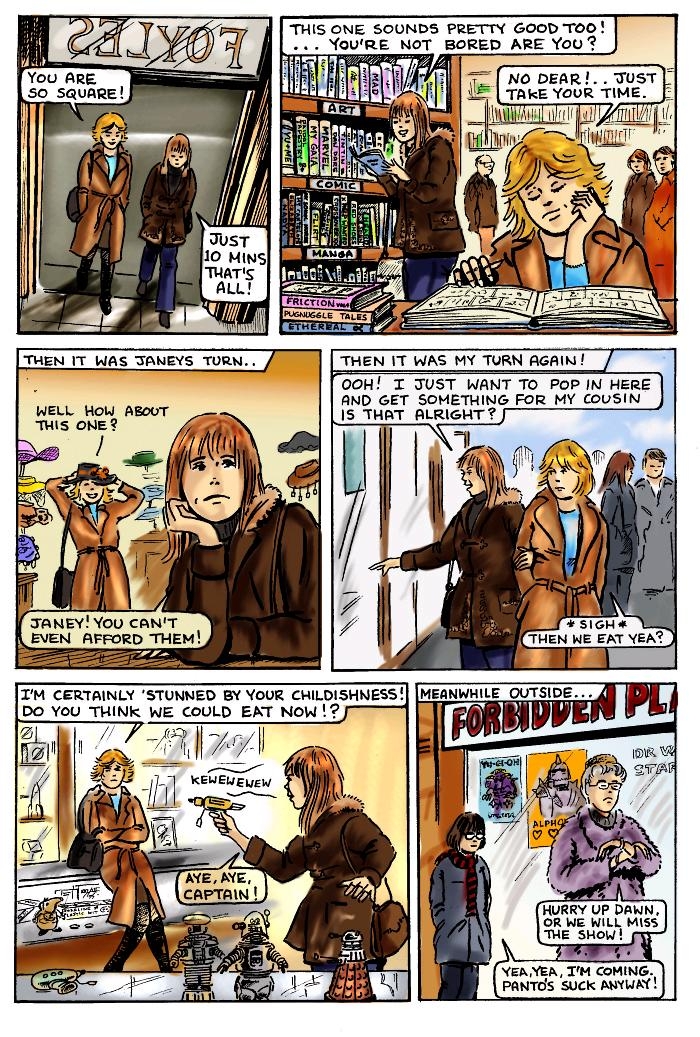 Hi all! so much to do so little time! Congrats to RhianConway for hitting the nail on the head like that by saying that Dawn was gonna show up!!and thanks to all of you as well for the lovely lovely comments you always leave!

Dear Sky Angel, incredibale colour a zations ROBBY the Robot a DR. WHO DALEK and a hand held RAY GUN damn could a kid want any thing more for CHristmass??? tommym

Been reading DrunkDuck comics for awhile but hadn't been prompted to register until seeing this page and just had to say the following: Screw Dr Who and the Daleks, that's a Womble in the display case under Janey. Wombles Wule the World!!! Oh, and is that a Blakes7 gun in Sarah's hand?

Cute!! You put a darlek figurine in the comic!! ^^ I love Doctor Who

oh dear ... and I'm gonna guess she's going to run across them snogging ...

Dan Dare on the comics shelf too! That is so old, I used to read that in Eagle comics, early Sixties. I love the drawing style of this comic because it reminds me of those old comics I read then.

OE EM GEE!! Dawn!!! Haha love the webcomic references. Is Sarah's cousin a Doctor Who fan by any chance?

You are doing a great job as always!

^,^ so fun with the titles, missed it at first

INNOCENCE IS OVER! D:> I cannanae wait for update...

I've been following this comic for a while now- Pretty good! :3

Looks like my my second choice was right. Everyone one who bet on dawn gets 3 times the enjoyment of the comic.

Sarah!!! Such cheek, it's those little bits that make this so delicious. You brightened up two dismal weeks. Thanks so much!

I am so glad there are titles - and actual titles at that - written on the books. It shows you really care about what your comic contains. It shows you worked. Not that I didn't know this before :)

Dawn is probably in love with Sarah, I know I would be. I'd much rather go into the book store than the hat store. I HATE clothes shopping.

Nice props for some DDers with the books, and OH BOY! is trouble on the horizon, why do I have a feeling they won't see Dawn, but she will get a good look at them.