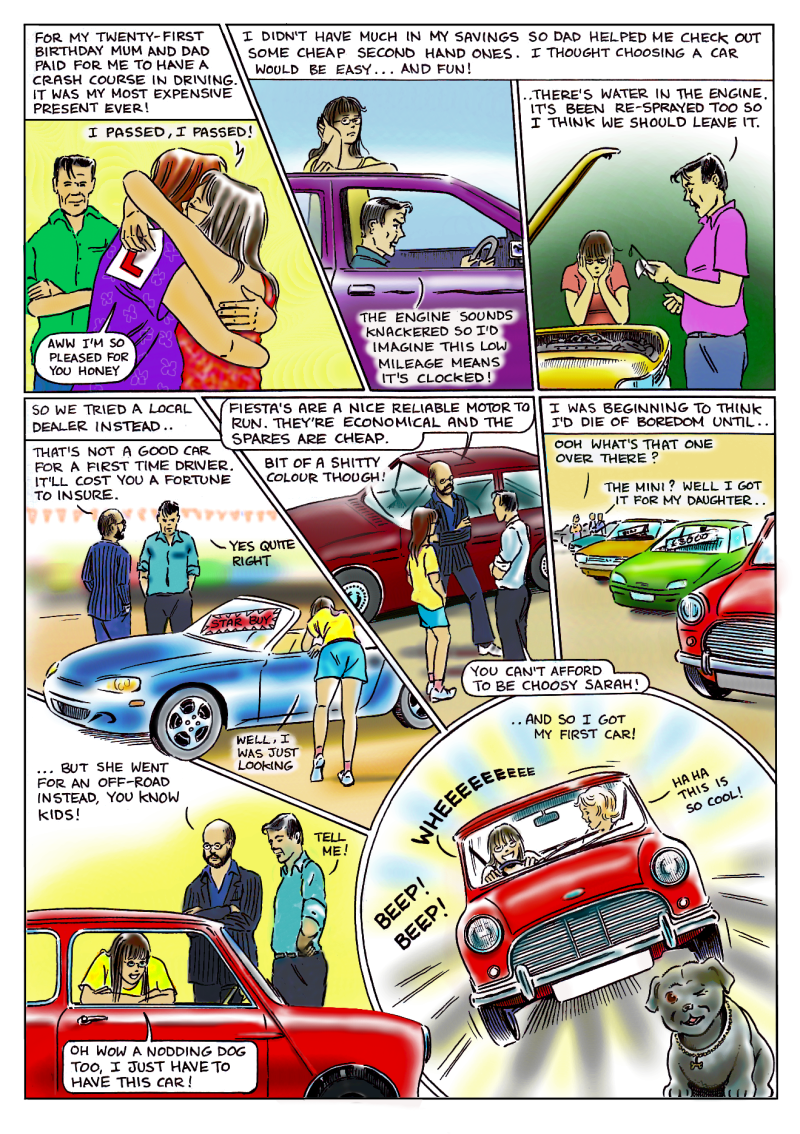 About 15 yrs ago I had my mini broken into and the only thing they took was my Garfield which was suckered to the side window. I was grieving his loss and on the verge of going round putting flyers on lamposts and paying out to have his face put on milk cartons when my g/f suggested I needed a break to get over it.
So we had a weekend in Brighton (I paid) and on the first morning she called me into a gift shop that had a shelf full of nodding dogs and said she would treat me. I wasn't really ready to have another car novelty quite so soon and as I looked along the line they all looked just really cheap and naff, but then one caught my eye; a little runt at the back that looked like he had been manhandled badly once too often. He had a dent in his side and a bit of flock missing from his right ear and was clearly old stock too as he was different to the others and his ass was peppered with reduced stickers, so I felt sorry for him and lent my girl the money to buy him for me.
Anyway he has stuck to my dash for 15 yrs now, and I'm very fond of him. The nicest thing about him is that he always agrees with me and never stops smiling. :)

BTW: My mini wasn't red it was shit brown but in this comic I get my own way, so big thanks to Carl E for letting me have it!

Next week: Sarah and Janey have an amusing time when they finally have tea with May, and the old girl has some interesting news about Nick!

I think Nick must be a crossdresser, but that' s just my thoughts. Those were HIS panties Sarah found.

:) I'm on the similar stage now, as my gf is looking for a car, and it's really a hard thing to do, to find a good car which is used. Anyway, it supreised me Sarah has bought a mini (mini morris isn't it?). The cars are here so expensive and almost unavialable

I had to sit my license twice...

It's so exciting getting to drive your very own car for the first time. ^^

Sorry I haven't commented in a while Sarah, I've been on holiday! (And I shall definitely reply to your email soon.) This page is very fun and it made me giggle lots. I can't wait to be able to afford my first car, and I know this is exactly how I will be. Cars are awful to draw, so this page is amazingly well done. I'm sorry to hear about your Garfield, but I know how you feel about Bumpy-- I always feel sorry for battered old things. I'm glad he's got such a good home, and that he gives you smiles. I love the part about him always agreeing with you. It sounds handy :D

hahahahaha it was the bobbing dog that sealed the deal

*sigh* such a typical dealer. I love the way he's (I'm) talking past Sarah to her dad. She's paying, but *he's* the one who needs to be sold on it! And there's always one car on the lot (usually the most unique or interesting) that isn't for sale - it's for some friend or family member, or one they want for themselves, "it's just there to get sorted out". But they're always willing to let it go - for a price! But it's the unique ones that I always go for, too. My current commuter is a '94 Beretta with 260,000 miles on it. I bought it used for a few hundred as an in-between car, vowing to just drive it till it died. The final selling point was that it was purple with white racing stripes and a large hello kitty decal on the rear fender. My daughters loved it! It's been three years, and the thing won't die. We'll see if it passes inspection again this year! Sarah, thnks so much - and you can buy your cars here anytime! No warrantee, though ;)

Heeey, did you ever get the pictures I sent you?

Never wanted a car, I always drove a motorcycle... :x

"Bumpy", eh? Our first car was a vomit-yellow Fiat that Mrs DAJB christened Bunbury (so we could go "Bunburying", as in [i]The Importance of Being Earnest[/i]!) I can sympathise with the loss of Garfield, too. When Mrs DAJB got a car of her own, it was stolen and used in a ram raid. She eventually got the car back, but her prized collection of [i]Raggy Dolls[/i] had been stolen - all except for Claude. The thieves apparently drew the line at anything French!

Sounds like your parents were related to mine, I took Drivers Ed in High School but wasn't allowed to have a license untill after graduation.