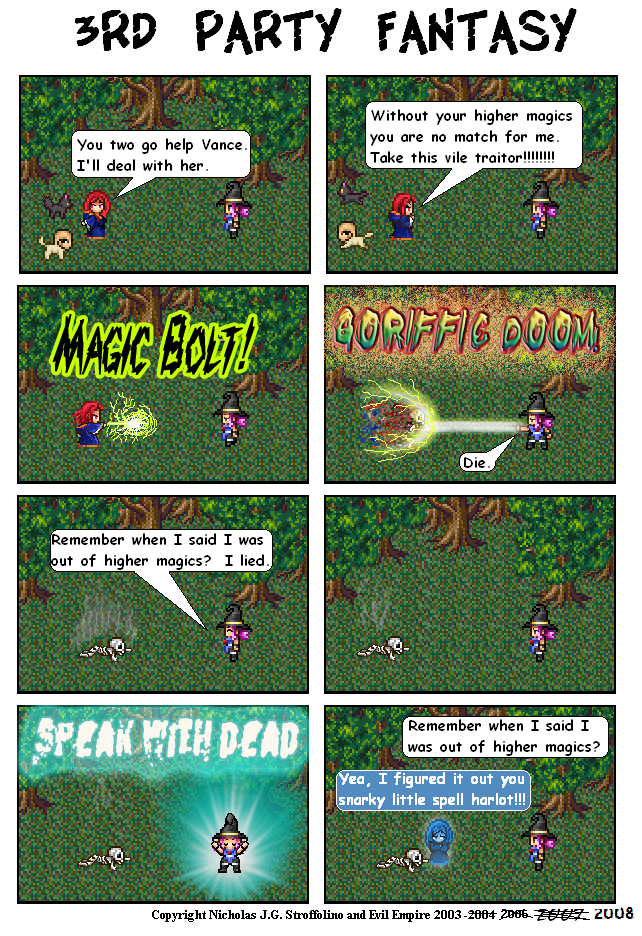 3rd Party Fantasy is back!

With the Night School manga all wrapped up 3rd Party Fantasy will be return for updates as time allows. I'm hoping for twice a week but that might be ambitious. I can't really promise anything at this time.

Joining me on 3rd Party Fantasy is my wife Amelius who is bring a higher quality to 3PF then ever before. My goal is to finish Amulet of Velsuvius storyline by the end of 2008 at which point I might start up a spin off comic following with a new story arc. I frequently worry that the old quality of the archives (3PF was one of my first series) makes the series hard to read. For example how Vance and Gil lack names for about 25 issues is something I new realize was a mistake.

If I could finish up the main story and move into a spin off it would let new readers get into the story and then choose if they want go back and read the first 3PF adventure. I'm not a fan of restarting comics though, I think 98% of the time it is a waste, so I'm not going to go back and redo them.

Although I'm just talking about the comic itself today I hope to bring back my humorous rants as well in future.

you have my commiserations on all counts. computers be fickle things. they allow you to work 100% faster, but generate 3 times the work at the best of times, and they also have the capacity ti obliviate any amount of work.

Yea well that was before my laptop with all my art programs and sprites died and I have not been able afford to have it fixed or replaced as you probably know from the CTV donation drives. Likewise VM stopped because Amy switched to double updates on CTV leaving her with no time to update Villainy Minor anymore. Night School wasn't my call, that was Platnium Studio's whom own NS. Maybe if CQ or CTV ever sell I'll be able to afford both the time and money it would take to get these comics going again at least to the point of properly wrapping them up.

(sorry if i seem to be overly critical. it's just a symptom of liking a comic that hasn't updated in a long time. this applies to about 50% of your comics. [I like 100% but you don't update around 50% of them])

further emphasised by the fact that over a year after declaring that your comic is back you still haven't bleeding updated! xD

What does it say about you that Amelius went from girl you barely knew to wife in under 50 updates?

I really want to see this come back... if nothing else than to see the end of the arc.

Loved working through this... :)

Welcome back Yay this is great

heh, I remember this. I'll have to re-read again. n.n

Well I know it isn't the same as an update but Vance shows up in today's side story in Cwen's Quest, just look in the author's notes. [url=http://www.drunkduck.com/Cwens_Quest/index.php?p=413930]You can read it here[/url].

awesome comic. the pixelated graphics give me a feeling of nostalgia! -laughs-

i want to learn that spell

Was there a blue moon las night? Srsly welcome back.

You made my day!Looking forward to more rants also.Now if only there was another issue featuring Adonis......