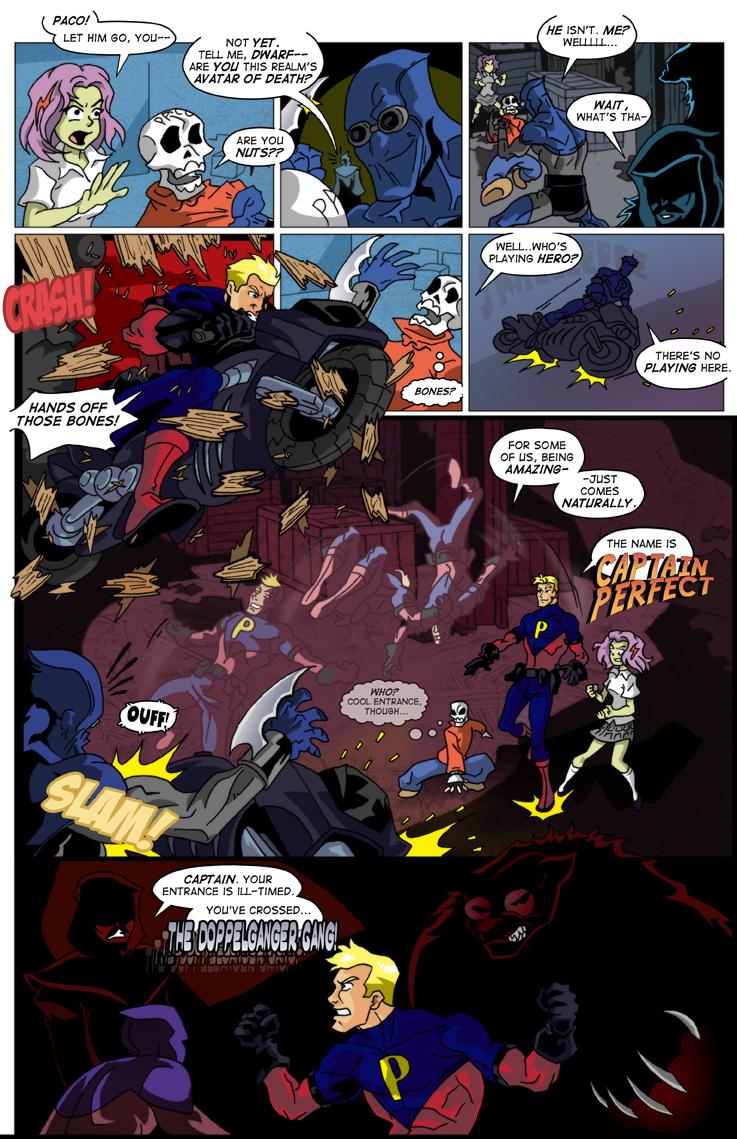 This beautiful page is by RedDeath of BAD GUY HIGH, and is set in the BGH universe. These are Dan's comments:

"With today's page I tried to begin the page with the white-panel boarder style of Pilli Adventure and have it turn into the black boarders used in BGH. For those of you confused, Pilli Adventure and Bad Guy High “unofficially” take place in the same continuity, because we've had a few crossovers already. This is the first time I ever properly drew Algeya's characters though, so I wanted to do them as much justice as I could.

“It may also be clear to everyone, that I have NO IDEA how to draw a motorcycle.”

Some of you may not be familiar with Pilli and Paco from Algeya's delightful THE ADVENTURES OF PILLI. Captain Perfect's brother, SuperDan, appeared in a storyline in PILLI starting here and Evan from BGH entered that same storyline here, so they coexist in the same reality. North of the American-Mexican border has been chronicled in BGH, south of it has been chronicled in PILLI.

We also give a collective name to the bad guys–the Doppelganger Gang. Yeah, these guys are new, but you may find ties to other webcomics nevertheless.

Why are they hunting the Death-Avatars in different dimensions?

And how bad-ass ARE they, since they're HUNTING Deaths, instead of running screaming from them?

We're going to give you a full week to savor this one. Next Tuesday, Captain Perfect fights on!

Wow, so much fun! I'm faving this to keep up. Seems to be where all the cool kids hang out!

This is a fun concept. Faved.

Congrats on the feature!

Excellent - congratulations on the feature!

Congrats on the feature guys!

congrats on the feature

well, since you have drawn attention to it, i'd say that the 6th panel is a bit off. the impact points shouldn't be on the wheels, which while you did have one, the other should have been something other than a wheel (other wise it would spin while it slid). this means that he would have kicked the bike from underneath him and be almost fully dismounted by that shot. i could be wrong about the position of people and maybe it did need to spin slightly, but he should have had his leg free before having it roll over to slide. you know if you didn't call attention to it i wouldn't have noticed it. good artists need to realize when they are that good, don't feel bad, xmung asked for people to point out things wrong with this one page he drew, before i really started looking for problems i just let the little things i saw as artistic perspective (they don't use gasoline explosions in movies because it is realistic).

Page is great, Dan--and very cool detail with the border change. As for the motorcycle . . . I hate drawing machines and vehicles, and I would never be able to come up with anything that looked half as good as your motorcycle. On another note, I still love the name Doppelganger Gang.

yay on the featured! congrats

Congrats on the feature! That was a quick one ^_^

Congratulations! Now you get a fancy award button in your profile and the adoration of the Drunk Duck community.

Wow! We got Featured!!

This is a fantastic page, great work Dan!

BTW, CROSSOVERKILL was very kindly reviewed in [url=http://cameotracker.livejournal.com/24348.html]CAMEOTRACKER[/url]---although let me hasten to say, both CROSSOVERLORD and CROSSOVERKILL were/are truly collaborative projects. The RedDeath of BGH thought up the opening sequence, for instance, and has designed many of the Doppelganger Gang, and everyone is making GREAT suggestions. CROSSOVERLORD's basic plot was thought up by Linkara of LIGHTBRINGER. It's kind of like DC's 52 was---where you had a lot of good talented people bouncing ideas off each other. (Here's hoping it never becomes like DC's COUNTDOWN...)

With the format change, I guess I am not being told when my favorited comics have updated anymore. I happened upon this to see what people were saying about the stagnation, only to see a new page (albeit one I already saw on the other site). This is getting annoying. I don't know what was so wrong with the old layout. But, if Death-avatars are being rounded up, that makes me think of cameos I now want to see. Steve from Life and Death, Death, MD from SuperFogeys and the tapeworm from Super Temps come to mind.

Yay for Pilli and Paco!