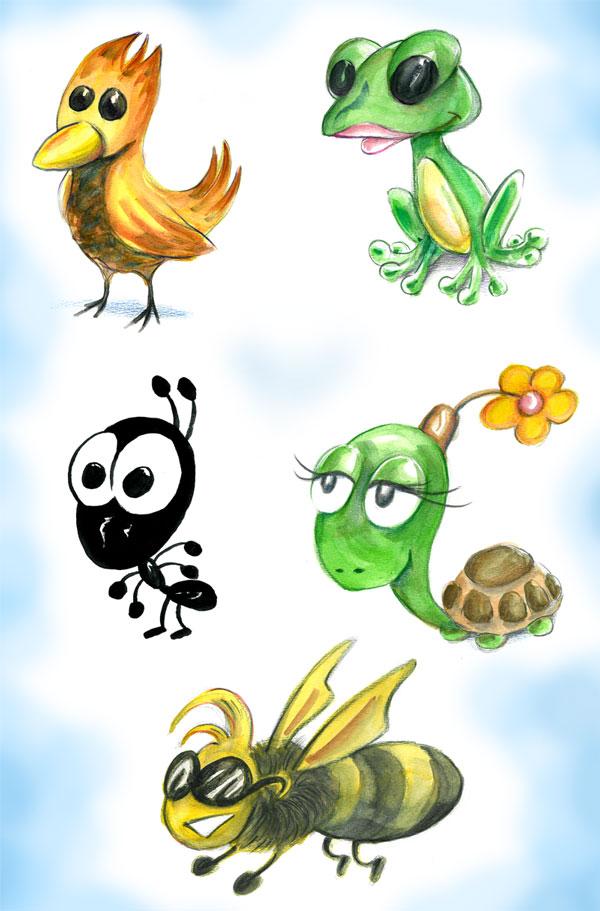 Wow, what am I doing? Am I updating? Well yes :D
After 9 months of absolute silence (in this comic, I've talked with most of you) I'm breaking it to tell you a bit about my life.

These drawings were done for my nephew's birthday (last month). My mom made him a little story and I illustrated the characters, the main one being the little bird named “Kiko”. It was the first time in 8 months I used my watercolors so that rebooted my work on that comic I announced last year as being “in production” (I even posted a “coming soon” teaser, lol).

What have I been doing for the last 9 months? Basically working. I told you I got a job as a flash developer, and oh boy, was that an experience. I met tons of great people in there, made new friends, dealt with really short due dates, criptic programming with no documentation, assholes (of course), but no with being short of money for a change.
I've never worked in such a big place before, and even though I had little next to no free time, I prefer this than being a freelance. Mainly because socially is much more exciting. Man, with all the things that happened in there, I have a handfull of ideas and inspiration to work on new comics now.

And that brings me to the latest event in my life, which is, I'm switching jobs. I'm moving to a new place that works exclusively developing online games, and it promises to be a much more challenging yet organized place than my current job. The downside? My coworkers, man, I love my workgroup! But deep down I know this is the smart move to make right now. Due to this I don't know if I'll have time to finish my comic and because of that I'm making this post.

Oh! I also made a presentation for DrunkDuck Awards 2010

well, my template and javascript codes are dead :(

Locoma!!!! Sounds like life is treating you fairly well in the employment area. I hope this new job of yours works out! Those cartoon characters are totally adorable. I would have loved a present like that as a kid. You are a good uncle. :P Well, if ever you do get free time, I will look forward to more of your lovely art work!

I totally missed this update. I have to check my drunkduck toolbar thingy more often. Those animals are darn cute.

While you were gone I promoted myself on SUCKS.

Yay! Life and work! Send some of those employment vibes my way. I think I got the wrong degree and/or have lousy luck. -_- Those are cute, especially the bee. It makes me think of the butterfly from The Last Unicorn.