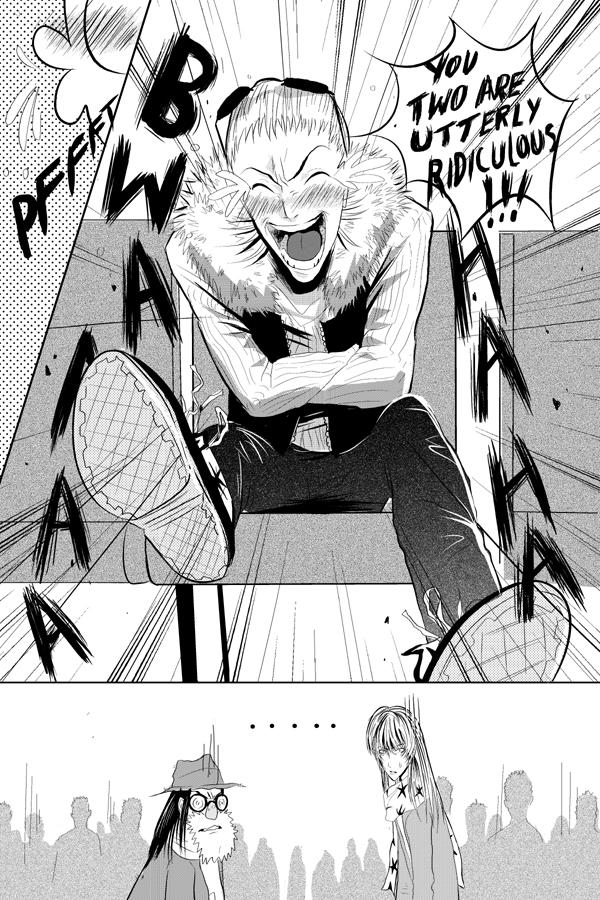 Your art style is seriously awesome and from what I've seen, the story's pretty good too. Argh... If only you could update, I'm sure this would be in the top ten! Keep it up, Kriffix!

While I admit that my knowledge of Japanese culture is not great, I have noticed a tendency towards believing in absolutes. In this case: "Old = Good, New = Bad" on one side and the opposite absolute on the other. (Americans has some of this too) Europeans generally have more balanced point of view. (I'm European...) "The old have some strengths and some weaknesses. The new have too. We should learn from both."

dood when are you going to update huh?? anyway they are both wrong. good tihngs about old shounen manga- full of 'heart' a lot more effort into the drawings, not dragged out so much, either (we talkin' 40's-70's shounen!)bad things about old shounen manga- it definately is only fitting to one gender, nd some of the ideas are samey, with lack of chqaravcter, to an extent.; good things about new shounen, so much more character develpment, and realistic emtions give the characters a lot more depth, and the issues in more modern shonen are even much better thsan shojo! (which focuses entirely on love and nowt else) it's good that it appeals to girls as well as guys, agian shojo manga doesnt evne tend to do that; it's a nice thing. bad things about new shonen tho- there is a total lack of creatiivty and effort in the craft, a lot of it nowadays is kind of mass produced;; and unfortnatley what was once a good idea can loose it's charm and spunk after a while. thasnks to producers i think, forcing the manga artist to drag out the story. good examples of a mix of old and new in a nice way i tihnk is one peice and eyesheild =)

Loving it! Keep up the good Manga!

Heh talk about anti-climatic =B Great usage of speed lines and text! Don't see many of those around here xD

hahahah, this comic is great ^^ keep it up :D

hehe and this is the attitude I have come to develop when the heated art debates go too far :P

Mood killer to the rescue!

XDD For the win!

You draw some nice figures, and your sense of contrast is better than I've seen in a lot of webcomics. I think the only way to make this stuff better is if there were some more elaborate backgrounds...I know you might not have a lot of time to draw between the deadlines you set for yourself, but I think it would improve this comic dramatically. Otherwise, I applaud the great sense of gesture and emotion you give your characters. Keep on truckin'. :D