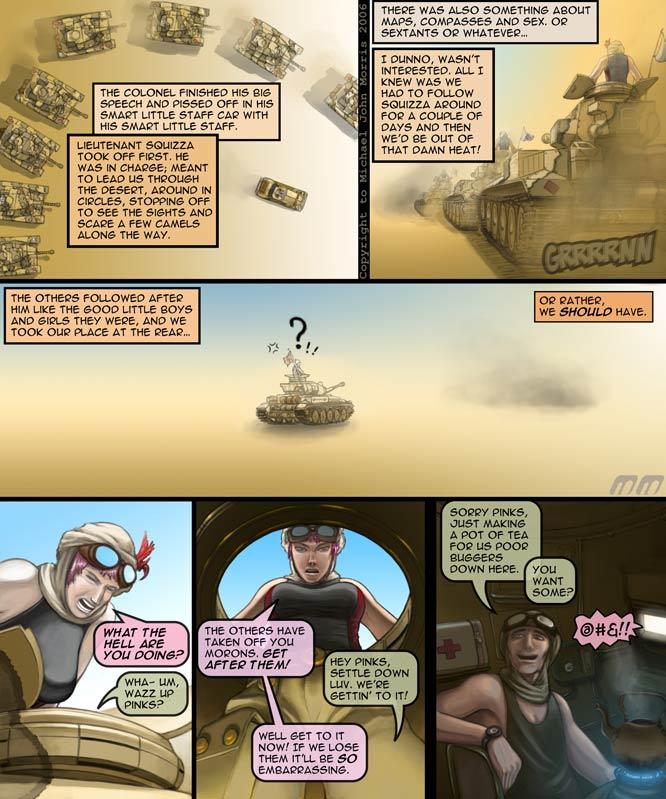 Page description:
The colonel finishes his little speech to the young tank troops and makes an exit. The tanks set off on their training mission, grinding off into the desert in single file. They all know where they should be going and what they should be doing, apart from Pinky's little groupÃƒÂ¢Ã¯Â¿Â½Ã‚Â¦ She was hoping simply tag along, following the rest, her crew are even worseÃƒÂ¢Ã¯Â¿Â½Ã‚Â¦

Commentary:
DONE! I actually finished colouring the other day, but I was holding off on putting the text in. I've got a whole huge story written and it's so awful to dive in, rip little bits out, and trim them down until they fit in a comic pageÃƒÂ¢Ã¯Â¿Â½Ã‚Â¦ Yuck!

AHHH! You're still drawing! For some reason, in myhead, I thought you weren't gonna draw anymore after those flash videos. Now I have to re-add you to my favorites so I can get in and up-to-date on the action. Sorry for being so late. This page rocks my world. There really haven't been that many downright funny and simple humor pages in Pinky, and I'm glad to be seeing this one. Hee hee! "Pinks!" It's brilliant.

Heh, what kind of masochist boils tea when they're stuck inside an un-airconditioned tank in the desert?????? ...man that's dumb! [b]Green Tangerine[/b]- Ha! She is when she's standing above you! ^^ [b]Jenshining[/b]- nope, no mystery. Now everyone can do it! Glad you like my dalogue ^_^ My comics are normally pretty dry on that aspect :( [b]Dracco[/b]- Thanks so much Dracco! [b]Magical[/b]-Thanks Magical, I try hard ^^

quite the imposing figure, isn't she?

Hahaha!! Love the dialogue. Now that I saw this page go up piece by piece it all seems so understandable.. I can see how everything you did fit together to make this.. It's like there's no mystery anymore!!

Just amazing the work you do.

I vote for a boot to the face here.

hehe, did they just randomly assign Pinky such a lazy team, or was it fate?

Reply---- [b]Lothar[/b]- Where do you think they've just gotten back from?!! [b]Whirly[/b]- Hahaha well, it's done now! I hate headaches... [b]sage[/b]- Thanks sage [b]Kingsnaky[/b]- I to love all those tanky things! I must watch Indiana Jone 3 again some time, it's been years since I saw that one... [b]King ZAC![/b]- Oh man, I'm going to check all your comics this very day! [b]Darkmax[/b]- Thanks Darkman ^^ [b]Sub[/b]- Ahhh, don't say that, it makes me think it's all too hard XD [b]Sarah[/b]- Yup, Gradients first! Then backgrounds, Figures and detail last of all... Oh, highlights go over the top of that. [b]Ham[/b]- Hahahaha! Yeah, that'll be the deal if I ever do a publishing deal or something... If the story was interesting enough. (which I have doubts about). The beatnik? WHat? I [i]could[/i] dress up like that I suppose, I do have a black beret and black turtleneck... [b]Green Tan![/b]- That's the trouble... If she didn't have boredom issues to start with, she'd know what she was doing! ^^ [b]Tuck[/b]- Ahoy Tuck! You have returned! It's been a while you mad surealist you ^^ [b]Jenshinshininjen[/b]- Gradients are a super shortcut! They're like broad colour washes in watercolour... They just establish the light and background perfectly, all in on go! [b]Aurora[/b]- That is EXACTLY it! ^_____^ [b]Hero[/b]- Thanks Hero ^^ [b]Spazzollio[/b]- Thanks Spazz [b]Mazz-Mazoooo[/b]- Hehe, thanks Maz ^^ [b]Coy[/b]- Ah, it's not as detailed as all that... Tanks can be a pain though, They're one of those things you have to draw about 10 times before they get easy. I'm not quite there yet unfortunately though :(

the only thing that would make this cooler is if Pinkys tank could travel back in time and fight Dinasaurs !!!

I love anything with tanks. For example: Tank Police, Tank Girl, that tank fight in indiana jones 3. It stands to reason that I'll like this, eh?

I love anything with tanks. For example: Tank Police, Tank Girl, that tank fight in indiana jones 3. It stands to reason that I'll like this, eh?

It's like everyone's naked...except the tanks...and except that everyone isn't naked.. I agree with Sub. It looks like it will be funny

haha you've got a lot of work ahead of you... this looks like a funny page

Cool seeing how you go about coloring your stuff. Gradients first eh?

PS: dunno if you know but over at nightgig subcultured compared you to the beatnik :D I think madscott sent you out a digi cam and outfit for some photoshoots :D

I guess thats a tip for all of us. Block in the backgroundcolor first before coloring the characters! Anyway it's looking like it'll be awesome again! Take your time ozone,a nd oicne again get this comic on sale! And when you do, please have signed copies available :D..come to think it of it, why not have a grand contest with as a prize one of your prints on poster and signed? ..cough..goes back to bed..has 140 degrees...tuuuut

I think that Pinky wants to get going... Guess she's not so bored anymore? I look forward to the finished page.

Hello sir! It's interesting to see the work-in-progress. I've always been amazed by your artness.