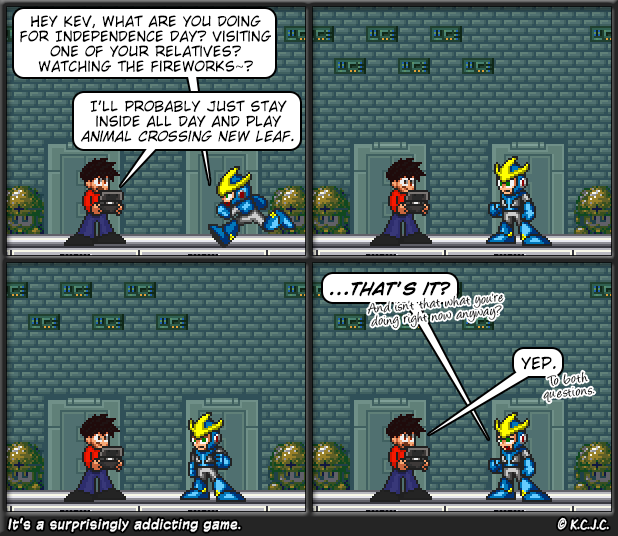 The lack of a good comic is all Petah's fault. He couldn't help me come up with an idea I could actually do in the allotted amount of time I had left (and even then, this was 3 hours late), and passed the buck off to the next person to join the chat. However, there was never anyone else who joined the chat.

I've been going through some shit IRL lately, so yeah.

So, as I mentioned before, my computer got replaced. I can't afford it though. Despite my dad saying he'd halp out and I only had to pay $500, he turned around, told me I had to pay $1000 (the majority) and then that was that. I'm now forced to pay back 1000 dollars, instead of 500 dollars. I dunno how that'll happen unless people are actually generous enough to donate money :( Also, it works great! I'm using it right now!

Anyway, if someone wants to be a nice person, actually see some sort of continuation to this comic and the others I work on in any way whatsoever, you might wanna wise-up and send in a couple dollars. Here's the url: http://adf.ly/JnKE

If you haven't seen it yet, I posted a comic about this very same issue on January 19th located here: http://adf.ly/yDxL (I need to reup it still..) :(

I'm still looking for a new Professor Oak. Anyone who wants to try out please contact me privately in some way (PQ, PM, email, IM, etc.) and send me a sample. Also, this voice needs to NOT be morphed by any sort of voice changer - such as MorphVOX, nor can it be some computer generated crap. If it is, you're just wasting both of our time. Seriously guys, the Flash won't be going anywhere if I can't replace him in a timely manner.

I'm all out of guest comi*shot* But seriously tho, a year and not a single person sent in a sample that I could even remotely judge? :/ Actually, that being out of guest comics isn't entirely untrue!

A message to those people who can't read: The next page is an animation made completely in Adobe Flash. Until it gets finished this comic cannot continue, I will never convert it to a normal page simply because it's not fucking possible. I also cannot work on the Flash until I get a new voice actor for Oak. I have not received any samples that were audible enough to be even considered worth it. So stop fucking asking already.

Send in more guest comic, money so I can get a computer that works and actually be able to work on things, and SOMEONE ACTUALLY TRY OUT FOR OAK I MEAN SERIOUSLY, WHAT THE FUCK PEOPLE?!

Well, now I can :WICKED:

Is anyone from the old days still around? I'm posting this message on all of the more popular Pokemon sprite comics in an attempt to contact my fellow spriters, and/or the readers of our comics. I don't know if anyone even remembers me, but I'm the guy that did "Pokemon Silver State Version". Long story short, I'm thinking about getting back into spriting, but I want to see if anyone is even reading sprite comics on DD anymore, and I want to bounce some ideas off my contemporaries and/or discuss the possibility of a collaboration. Even if you're not a spriter, I'd like to hear from you if you think you have some sort of input that might help. An email would probably best if you want to get a hold of me: tbustah@gmail.com I hope to hear from somebody soon.

where is flash :( wtf kevin

>Implying there has even been a guest comic since 2011.

I honestly have to agree with Arc.

Six years... wow. Kevin, why do you even bother with this anymore? do something else with your time man. No-one's going to be a voice actor for this. Your fandom of 6 years past have all gone on to do better things. Anyone who drops in now will just see a 6 years worth of guest comics. I'm surprised this hasn't been deleted yet.